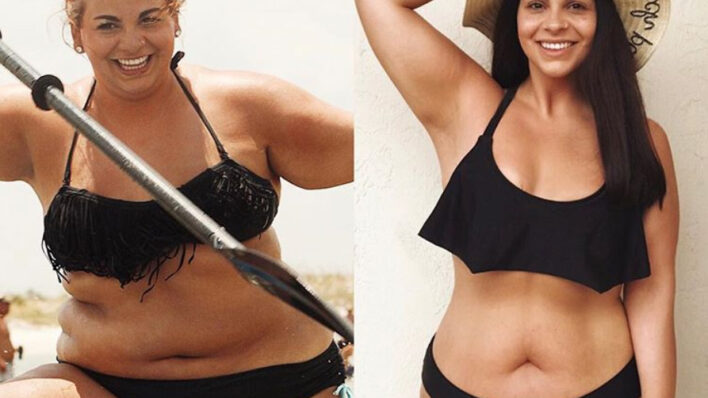 How She Lost 80 Pounds by Creating New Habits, One Step at a Time

When Randi Vasquez realized her weight was starting to affect her work as a wedding photographer, she decided it was
By MJ Kelly    June 28, 2019

When Randi Vasquez realized her weight was starting to affect her work as a wedding photographer, she decided it was time to change.

“I remember one proposal session on a mountain and I had to run up and down this trail,” the 27 year old told People. “I couldn’t keep up with the couple and I remember that day was a big moment because I felt so out of shape. I was so embarrassed because I was so exhausted.”

Growing up, she was “always pretty chubby”, but never let her weight get in the way of her confidence.

“I was always feeling myself,” said Vasquez. “I wasn’t scared to wear a two-piece bathing suit or trendy outfits. I wasn’t always the happiest about my image, but I didn’t let that hold me back.”

But that all started to change after she graduated college and found herself in a “post-grad slump.”

“I couldn’t find the job that I wanted, and I had trouble adapting,” she remembered.

Every weekend, her and her friends indulged in hours-long boozy brunches and later, dined on fried chicken and waffles. In between, Vasquez turned to fast food and her weight kept creeping up.

“I was getting heavier and heavier,” she said. “I started to notice that my confidence was going down, and I wasn’t motivated to do anything. It started to click that if I didn’t change my life that it would just get worse and worse.”

After struggling on the job one day at a wedding because she was so out of shape, Vasquez decided it was time to start trying to lose weight.

In the fall of 2016, she joined her local YMCA and fell in love with a body pump class.

In March 2015, Vasquez was introduced to Kayla Itsines’ famous Bikini Body Guide Program by a friend and later that year got herself a Fitbit so she could learn to maximize her workouts as well as monitor her heart rate.

Around the same time, she began cooking more and opting for healthier foods but without eliminating fast food completely.

“I didn’t want to restrict too many things,” said Vasquez.

A major turning point for Vasquez during her transformation journey was when Kayla Itsines shared one of her progress photos on Instagram.

“That was one of the best moments for me, because it helped me break down a wall I had up,” she remembered.

“Before I was heavy and I didn’t want anyone to know that I had gained weight after college and that I was struggling, but having that out in the world tore that wall down. It helped me share my story and meet other people like me who were tackling their weight problems.”

She thought she’d achieve better results if she made small, incremental changes to her lifestyle

She was right: “Year after year, month after month, I made small little goals and just kept going,” she said.

Vasquez’s been working on maintaining her weight, and has been open with her 72,800 Instagram followers about the ups and downs of her journey. Earlier this year, she admitted that her weight was “constantly yo-yoing” during much of 2018, and that she’s been striving to find balance.

Since then, she’s crushed one of her bucket list goals: to run a half marathon.

“Before I even started losing weight, it was just something I really wanted to do,” she says. “I wanted to prove to myself that I can do something hard. Crossing that off my list was so awesome. It was such a good feeling knowing that the past few years have really changed me as I crossed that finish line.”

Vasquez is feeling better and more motivated than ever

“Losing weight makes you feel more motivated in all areas of your life. And I’m able to run around everywhere,” she said.

Vasquez recently got engaged to her boyfriend David Armin Khataei and is continuing her journey toward fitness, happiness, and her own wedding.

“I don’t feel like my weight can hold me back anymore. I was happy before but there was so much I was held back from that I didn’t even realize.”