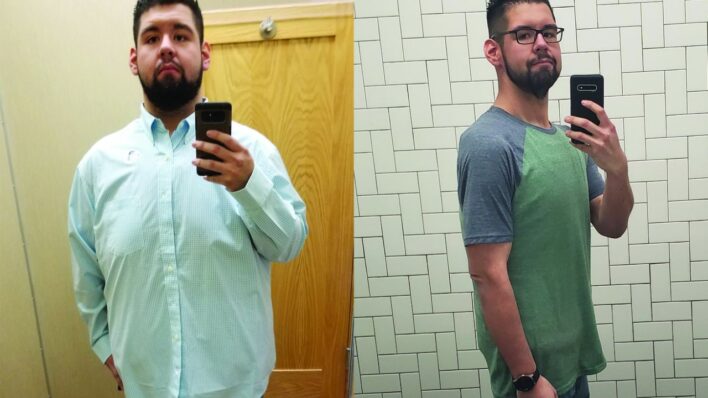 A health scare in 2016 inspired Mike Castadena to not only lose weight, but to get healthy mentally and physically
By MJ Kelly    May 31, 2019

A health scare in 2016 inspired Mike Castadena to not only lose weight, but to get healthy mentally and physically too.

During a visit to the doctor’s office after suffering heart palpitations, Mike was diagnosed as prediabetic, and the doctor recommended he start medication right away. He was 25.

“I remember being extremely upset, feeling like the doctor had given up on me,” Castadena told Yahoo. “And madder at myself for letting myself get to this point.”

At his heaviest, Castadena weighed over 500 pounds. He’d always been overweight and as time went on, he resigned to being big for the rest of his life.

“Whether it was issues finding clothing or shoes that would fit, feeling tired, or suffering from sleep apnea, I always just thought that was the way that my life was going to be,” Castadena said.

That was until he got the wake up call that kickstarted his weight loss journey. With no real plan or specific goals in my mind, all he knew is that he wanted to lose weight so that he could feel better both mentally and physically.

“I didn’t have a real strategy,” he recalled. “I just knew I had to make a change.”

Castadena decided to try a few different approaches, giving juicing a shot first. He started by cleaning out his fridge and cupboards of soda and cookies. Then, he bought a juicer, juicing books, a scale and a bunch of fruits and vegetables.

“That lasted all of one day,” he said. “By the end of the first day, I was tired, cranky and hungry.”

Determined to take control of his health, he didn’t let the setback get in his way. Castadena followed a friend’s suggestion that he try a low-carb diet. After doing some research, he quickly realized that it was the most sustainable option for him and started the following week.

As Castadena started to lose weight, he started to feel better and eventually his heart palpitations stopped. “At that point, I knew that I didn’t want to give up what I was doing.”

Since he started, he’s been having continued success with a low-carb diet for over three years now. “I’m lucky to say that the 99% of the progress I’ve made has been from a change in eating habits,” said Castaneda.

His next goal is to start going to the gym more regularly to help maintain his healthy weight and have long-term success. “My ability to get around and just do day-to-day things has been incredible,” said Castadena. “It’s nice to be able to tie my shoes or get ready without it feeling like a chore all on its own.”

Not only has Castadena lost 331 pounds, but his mental health has improved too.

“My confidence has gone through the roof,” he said. “I’ve become more outgoing and interested in trying new things — things that I would have never dreamt of trying or even wanted to attempt to try.”