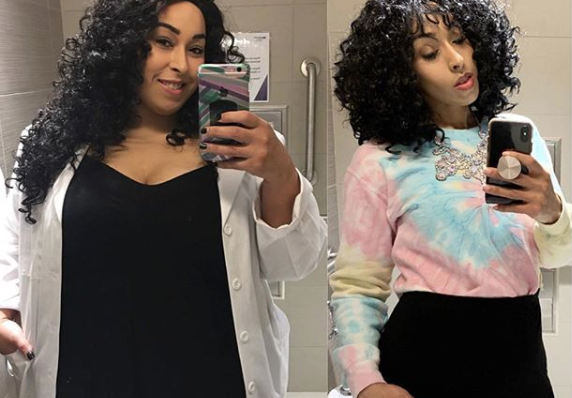 Amber Neal had struggled with her weight her entire life, trying extreme dieting to drop pounds. “I grew up overweight,
By MJ Kelly    April 30, 2019

Amber Neal had struggled with her weight her entire life, trying extreme dieting to drop pounds.

“I grew up overweight, but I didn’t really become aware of it until third grade,” she told Women’s Health. “It hit me one day in gym class when a boy I had a crush on told me I looked like I was pregnant.”

Devastated, she tried every diet in the book to lose weight but by the time she turned 14 years old, Neal weighed 285 pounds.

In high school, she was able to lose nearly 100 pounds, but it wasn’t long before the weight came back, and it kept climbing.

By her sophomore year in college, she tipped the scale 353 pounds.

At 19, she underwent gastric bypass surgery and lost 154 pounds. A decade later, she was back up at 305 pounds.

In January 2017, she decided to lose weight once and for all. As she’d grown increasingly self-aware, she began to notice a pattern and realized she’d had enough. Sick of the yo-yo dieting, she needed professional help. “I found myself living the same dismal day over and over again—and food was my only oasis.”

Her first step was to go to therapy, to begin treating her anxiety, depression, and binge-eating disorder. “It took therapy to make me realize how awful my eating habits had become: I ate from the moment I woke up to the moment I went to bed.”

“I’d often eat until I felt sick, go to bed, then wake up and do it all again the next day—and sometimes I’d even wake up in the middle of the night and snack.”

On top of the mental and emotional anguish, her unhealthy lifestyle was making her physically ill too. “I always felt lethargic, sluggish, and bloated.”

As part of her therapy, Neal worked on developing healthier eating habits, which meant absolutely no crash or fad diets.

In addition to changing her relationship with food, she also started exercising regularly and committed to doing at least 45 minutes of movement every day.

“Before therapy and dieting, I was constantly in pain and out of shape—even hoisting myself out of bed every morning was super-painful,” remembered Neal.

As she began to feel empowered by her progress on the treadmill, she started using the elliptical machine for a change. Once she felt strong enough, she started to climb the stair-stepper machine. “It became my go-to for an intense workout,” said Neal.

For Neal, the key to a successful transformation journey is to take things one day at a time.  “Small, daily efforts really add up,” she said. “On really difficult days—which I still have—I take things one meal or one moment at a time.”

While Neal is proud of having reached her weight loss goal, she urges others who want to lose weight to never put their lives on hold in the process.

“If there’s no weight or size limit on your interests, then get out there and pursue them now. It makes the journey the much more enjoyable.”