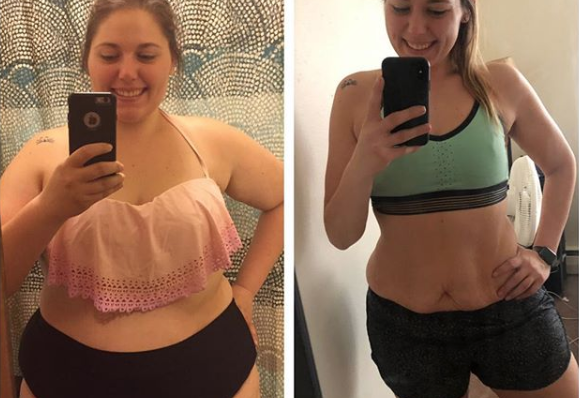 Danielle Patera lost 150 pounds after she realized her weight was preventing her from living the kind of life she
By MJ Kelly    May 24, 2019

Danielle Patera lost 150 pounds after she realized her weight was preventing her from living the kind of life she envisioned for herself.

It was in May of 2017, during a family trip to Kentucky, she decided to spend a day hiking at a local rock formation. Patera weighed 340 pounds at the time but wasn’t too concerned about the idea of trekking around the park– until the inclines became steeper and she became out of breath. Then, when it came time to pull herself over a boulder, she struggled.

“I saw my sister do it. And she jumped back down to help my mom up and my mom got up. And I struggled. It took me 40, 45 minutes,” Patera told TODAY. “That trip made me realize that if my 54-year-old mom could do this with no problem, and I am struggling, I needed to make a change.”

Tired of always feeling uncomfortable and realizing just how much her weight was limiting her, Patera decided to take charge of her health and embarked on a two-year long transformation journey.

During the two weeks following the trip, Patera researched different exercise programs and nutrition plans, and finally came to the conclusion that a simple approach was in her best interest. Her focus was to consume fewer calories while tracking what she ate, and to exercise more.

With her mind made up, there was still something standing in Patera’s way of reaching her weight loss goal: her fear of going to the gym alone. So, she reached out for some support.

“I asked my brother to go with me,” said the 27 year old from Milwaukee, Wisconsin. “I told him ‘I want to make this lifestyle change and I need to lose 150 pounds. I’m going to start and see where I end up.’ And his exact words were ‘Holy crap that’s insane.’”

He joined her at the gym for a month and the extra support gave Patera the motivation she needed to keep pushing towards her goal.

“I don’t think he realized how much I needed that,” she said.

Finding the right nutritional balance was also a challenge at first. During the first few weeks of her weight loss journey, Patera ate nothing but salads for lunch and dinner.

“I was so scared that I was going to flop,” she said. “I was really clueless for the first month and I am surprised I lost so much weight.”

Within a month, she was able to lose 30 pounds. Patera continued exercising, experimenting with different foods, and discovered how to make healthier versions of the foods she loved.

“I learned how to make my own low-calorie pizza dough with fat-free Greek yogurt and self-rising flour. I know that seasonings are better than sauces,” Patera recalled.

While she was making consistent progress, she still hit plateaus. Determined not to give up, she switched up her exercise routine whenever she reached a standstill.

“I had zero arm strength. I have never been able to do a pushup or a pullup,” she said.

Knowing that, she incorporated weight lifting and more intensive cardio into her routine.

Since the beginning of her weight loss journey, Patera has lost 153 pounds, bringing her weight down to 187, but she still has some work ahead of her. Her ultimate goal is to weigh between 170 and 180 pounds.

Still, at 187 pounds, Patera is happier than she’s ever been and is thoroughly enjoying life.

“The ease which I can do things is insane,” she said. “Losing weight has allowed me to be myself and find who I am and speak out and stand up for myself.”