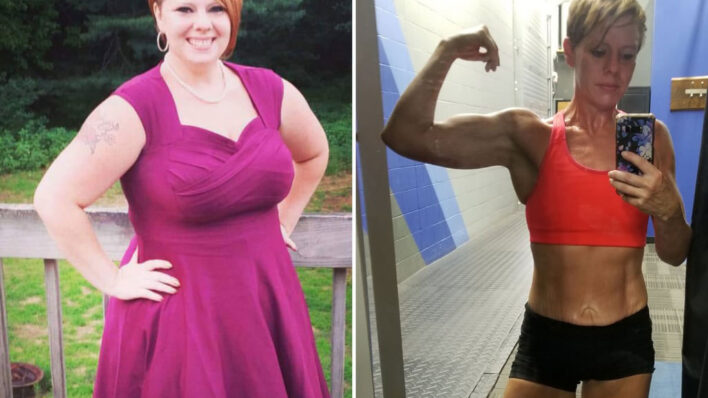 When Tabitha Beasley struggled to walk because of her arthritis pain, she started to worry she wouldn’t be able to
By MJ Kelly    May 13, 2019

When Tabitha Beasley struggled to walk because of her arthritis pain, she started to worry she wouldn’t be able to

When Tabitha Beasley struggled to walk because of her arthritis pain, she started to worry she wouldn’t be able to keep up with her children and realized she had to change.

“I just kept thinking about how bad things would keep getting if I was to continue down this path,” she told Popsugar. “Would I even be able to run, play, and keep up with my kids as they grow older?”

At 26, she was overweight and suffered from arthritis in her knees, constant headaches, bad anxiety, and poor self-esteem.

Tabitha only began having issues with her weight when she went away to college, but even as a teenager she struggled with body image and lacked confidence.

She started noticing the changes in her first year of college.

“The ‘freshman 15’ became a real thing for me. From there, my weight kept going up, and I continued to become more self-conscious,” said Tabitha.

Within 5 years after she finished college, Tabitha had three children — a daughter, followed by a set of twins.

She favored takeout, frozen, and boxed meals out of convenience, and by 2013, she was the heaviest she’d ever been. Standing at just 5’1”, she weighed 220 pounds.

At 27, Tabitha decided she’d had enough and felt ready to take charge of health, so she started looking into some of the different ways she could lose the weight.

She tried jogging, Zumba on her Xbox, and bought and started using a stationary bike. Tabitha was so determined, she even got a gym membership and started doing cardio every day, but she wasn’t enjoying any of these activities.

“I did lose about 20 pounds throughout these times of trial and error, but my efforts were all short-lived as I lacked motivation and enjoyment from these changes, and felt too restricted to continue on successfully,” she said.

Eventually, Tabitha reached out to friends on Facebook for help and a friend invited her to a join a group about counting macros. “I was completely oblivious to what a macro was,” she remembered. Through the group, she started learning how to count her protein, fats, and carbs.

To reach her weight loss goals, Tabitha calculated her macros so that knew what she should eat. Then, she started to track and weigh her regular pre-diet food intake.

“I realized I was overeating fats and carbs while undereating protein, but was continuously eating too many calories in total,” Tabitha explained.

Empowered with this new knowledge, she started making changes to her diet by tweaking recipes, eliminating certain of her go-to snack foods and replacing them with healthier options.

To satisfy her late-night snack cravings, Tabitha swapped her usual milkshakes, cookies, and full-fat ice cream for a serving of Greek yogurt, high in protein.

“Finally, I was able to learn how to enjoy meals, feel full, and become healthier while doing so,” Tabitha said.

She had little to no interest in fitness and was clueless about exercise — but that all changed when she saw people posting all of these inspiring transformation photos of women who were doing crossfit. By that time, she was down to 200 pounds.

While the cost discouraged her, Tabitha decided to try out a trial class.

“After my first class, I left with so many emotions. I was completely out of shape, sore, and tired, but I also felt so accomplished. I took a huge step and decided to join,” she said.

It was extremely, physically and emotionally, challenging at first but she was able to modify the workouts for her own level.

“All the coaches there constantly encouraged me and helped to keep me accountable both at the gym and with my nutrition,” Tabitha said. “Between the coaches and community that rallied behind me during CrossFit classes and my eagerness to succeed, I began pushing myself harder than ever.”

Soon enough, she was losing, on average, two pounds per week and her overall health started to improve.

Best of all, she was able to keep up and play with her kids.

“I started feeling strong for the first time ever, which was empowering. With each day that passed, I could do more physically than when I started and continued to see amazing progress,” she said.

Life took a drastic turn for Tabitha when, nearly six months into her transformation journey, she decided to move across the state. She’d lost 50 pounds so far and was determined to not let anything negatively impact her progress, so she worked hard to keep on top of her nutrition and getting to the gym.

She started going to CrossFit Buffalo and the change of scenery wound up being the extra motivation she needed to keep moving towards her goal.

In the span of five months, she lost 30 more pounds.

“For the first time in my life, I was a size 0, my headaches were almost nonexistent, my knees felt so much better, the crazy bruising I would have was gone, and my anxiety had decreased significantly,” Tabitha said. “I never felt better and I knew it could only get better from there, as long as I kept working hard.”

Today, she continues to focus on maintaining a healthy weight, and her transformation has taught her how to rethink her body image.

“My body isn’t just about a number on the scale.”

Tabitha continues to set goals for herself, but is no longer chasing after weight loss. More than anything, she just wants to become a better athlete and to keep learning how she can improve her nutrition.

“I’m very thankful that I found what works for me,” Tabitha said. “I’m 31 years old, happier and healthier than ever, and more confident in who I am — inside and out — than I ever have been.”