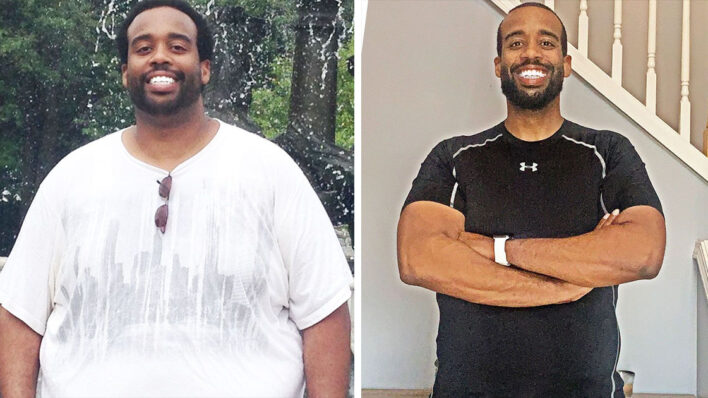 Jason Phelps got a wake-up call one day when he stepped on the scale and realized he weighed 395 pounds.
By MJ Kelly    May 6, 2019

Jason Phelps got a wake-up call one day when he stepped on the scale and realized he weighed 395 pounds.

“That weigh-in scared me,” he told Men’s Health, “but I felt different. I felt determined to make a change.”

He’d been during his teen years and well into his twenties but as he began to settle into his career, his activity level started to decline.

Phelps, who works as a manager for tax and accounting consultants remembers his weight gain seemed subtle at first: “The weight gain was relatively slow, so it was easy to ignore,” he said. “But five to ten pounds gained per year adds up to a pretty large amount over 15 years of time.”

Phelps’ admits that his lack of exercise and poor diet played a role in his weight gain over the years, but his biggest challenge was breaking through his denial.

It was in February 2018 that he decided to transform his life. Having heard of intermittent fasting and of its success rate, he wasted no time and began fasting that weekend for 16 hours each day and was surprised by how good he felt.

Over time, Phelps began losing weight and the process taught him how to become more mindful of how certain types of foods made him feel and what he was eating.

“I also became much more aware of the difference between actual, physical hunger, and just being mentally ‘hungry,’ which was almost always caused by boredom, routine, stress, or cravings for a specific type of food,” he said. “I learned quickly that if I was able to push past my mind telling me that I was hungry, that within an hour or so that hungry feeling would be gone.”

Shortly after he started his transformation journey, Phelps hit a roadblock when he broke his foot.

“That was scary because I remembered breaking my other foot back in my twenties, and gaining weight afterwards because of inactivity,” he said. “But this time was different—I was determined to take what was a weakness and make it into a strength.”

He got a heavy bag for the house and began hitting it every morning, even with his foot in an air boot. As soon as his foot healed, he started going to the gym to lift weights.

Now 40, Phelps dropped nearly 120 pounds in the span of a year. While he’s proud of his success, his goal is to lose another 30 or so pounds.

“I can’t even explain how much better I feel. My overall energy level is way higher. My mobility and strength are greatly improved,” said Phelps. “But I know I’m not at my goal yet and I am as motivated as ever to keep pushing.”

For Phelps, the key for weight loss success is a combination of consistency and patience and he urges others wanting to transform their lives to reflect on that.

“Understand that it won’t happen overnight,” he said. “Make small changes at first until they become a habit. Then progressively add more and more habits, and build momentum along the way.”