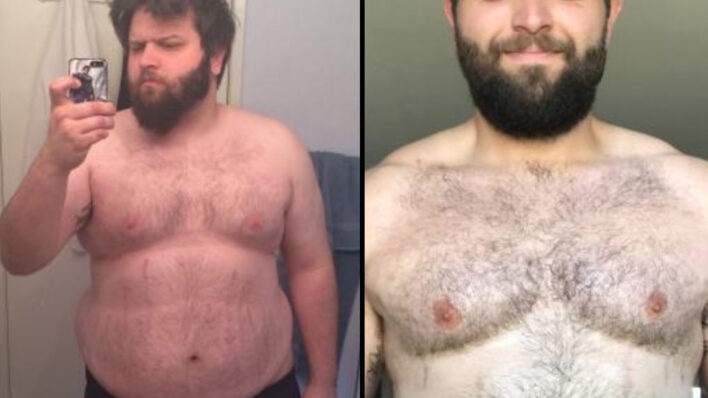 Pedro Perez broke down in tears when his father called him out on his problems with food. In that moment,
By MJ Kelly    April 19, 2019

Pedro Perez broke down in tears when his father called him out on his problems with food. In that moment,

Pedro Perez broke down in tears when his father called him out on his problems with food. In that moment, he knew something had to change — and it wasn’t just his weight.

When his dad asked him how much weighed, Perez couldn’t give him an answer because he hadn’t stepped on a scale in so long.

“I was too afraid to look in the mirror or step on the scale,” Perez told Men’s Health. ﻿

At 25 years-old, Perez weighed 342 pounds and it was the result of work-induced stress and emotional eating.

“When I was in junior college, and about 20 years old, I was 230 pounds and very strong,” Perez said. “I transferred to a four-year college to study engineering while working full time. I was stressing myself out with workloads and only eating fast food. As my emotions would get out of check, so would my eating. I didn’t know how to comfort myself without food.”

Perez had been in denial about the toll his lifestyle was taking on his health, but luckily his father stepped in.

Having his dad sit him down to talk about his weight came to Perez as a surprise. “This was a shock because throughout my life, [my] dad was never less than 300 pounds himself.”

“After that conversation, I forced myself to get on the scale and look in the mirror. I felt contempt toward myself. I was angry and I was frustrated. I knew there was only one person to blame and I was looking at him,” recalled Perez.

With a newfound awareness and his father’s support, he was ready to take charge of his health.

After he’d attempted to lose weight several times in the past, only to set himself up for disappointment, Perez decided to take a different approach this time around.

He reflected on the following questions: “What have I done when I tried to lose weight in the past? Why didn’t it work? What can I do differently?”

When he realized there was no quick-fix to weight loss, his goal was to reach long-term success.

Perez decided to start eliminating one type food at a time, without rushing the process.

In the first month of his transformation journey, he lost 12 pounds by only cutting out soda from his diet. The following month, he cut out desserts and lost another 10 pounds. After a year of slowly and steadily eliminating problematic foods and beverages from his diet, he lost 51 pounds.

“This cemented in my head that these foods were poison to my body,” said Perez. “It allowed the message to sink in.”

Capitalizing on his success, he kept on with his efforts by tweaking his diet and incorporated cardio and weight training into his daily routine.

Not only was he able to lose weight, he gained mental clarity in the process. “I also started to feel like I was taking care of myself instead of punishing myself,” he said. “I felt like, ‘This isn’t a diet—this is just how I live now.’”

While he was able to reach his goal, his journey came with its challenges. For Perez, the hardest part was beating his sugar addiction and silencing his inner-critic.

“The biggest hurdle is always the internal battle,” Perez said. “My internal dialog was not supportive for a very long time. I got into therapy to help with this, and weight began falling off again. I think getting clear on the emotions that drive weight up can be very impactful on keeping the weight off. Once my mentality changed, everything else shifted with it.”

He urges others who want to achieve weight loss success to figure out their “why.”

“Difficult things are easier to do when I understand why I am doing them,” he said. “If your ‘why’ is good enough, it will propel you forward.”

“Lastly I’d say, remember to compare yourself to who you were yesterday, and not who someone else is today,” he added. “It’s a very easy mental trap to fall into, yet it is utterly avoidable. Onward and upward.”