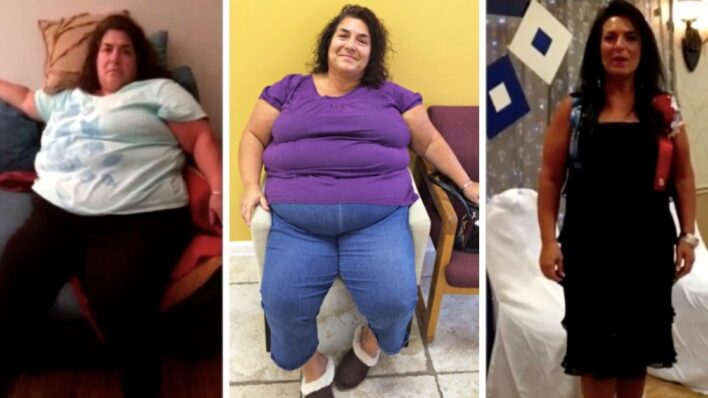 Linda weighed 349 pounds. It was the heaviest she’d ever been and she “hit rock bottom.” So she turned her life around.
By MJ Kelly    February 4, 2021

Linda weighed 349 pounds. It was the heaviest she’d ever been and she “hit rock bottom.” So she turned her life around.

When Linda Migliaccio’s mother passed away, she couldn’t stand long enough to deliver her eulogy at the funeral, after suffering a torn ACL and meniscus in her right knee.

At the time, Linda weighed 349 pounds. It was the heaviest she’d ever been and she “hit rock bottom.”

“I didn’t want to be here anymore,” she told People. “I wanted to be in heaven with my mom. It was just too hard.”

Growing up, she was surrounded by comfort food at home. Her mom, who loved to cook, always had fresh, baked goods coming out of the oven, and Linda began to associate food with “feeling better.”

She remembers her weight started becoming an issue in high school when, as a cheerleader, she started to feel like she was heavier than the rest of her cheer team and classmates.

At 15-years-old, the New Jersey native started her first diet which kicked off a lifetime of struggling with her weight.

Throughout the years, Linda, who has since been diagnosed with a binge eating disorder, estimates she’s been able to lose over 100 pounds nearly a dozen times.

The problem was that every time she did, she went back to binge eating all the foods she’d missed, only to gain all the weight back again.

While Linda cared for her ailing mother, she gained 200 pounds, and after a fall in her bathroom, she ended up seriously injured. Looking back, she said it was the “lowest point” of her life.

Her weight led to further obstacles

After her mom passed, she eventually consulted with a surgeon for her knee, which only seemed to make things worse, initially.

“The surgeon said, ‘I’m sorry, I can’t do surgery because you’re too large to withstand the rigorous rehab,’” she remembered.

And then he said, ‘And I’ll tell you what, if you don’t lose weight, I give you one year and you’ll be wheelchair bound.’

At first, his words “were hard to hear, and I thought they were very cruel,” she remembers. “But he did me the biggest favor of my life being blunt like that. It was what I needed to hear, and that’s what turned me around.”

Linda set herself a hard goal

In 2016, after years of battling her weight, Linda committed to losing the weight for good and started by adopting a nutritarian diet, without cutting anything out entirely, which contributed to her success.

“I never call myself vegan or vegetarian, because I just can’t make the commitment,” she said. “I love cheesesteaks and ice cream, and as soon as I tell myself I can’t have them, I’ll eat as much as I can. Instead, I stick to my plan 80 percent of the time, and 20 percent of the time I can go a bit rogue.”

Linda also worked out regularly but the key to her weight loss triumph was shifting her mindset.

“What was different this time than all the other times was I finally made a mind, body, spirit connection,” she said. “I always thought of my weight loss journey as a numerical goal and a size goal, and when I got to near that size, then I would just relax and think, ‘Okay, I’m done.’ This time it was very different.”

She found support along her journey

Linda explored that mind-body-spirit connection by picking up yoga, meditation and by strengthening her Christian faith, but more than that, it was the weight loss support group she joined and her best friends’ encouragement that helped her the most.

In two years, she lost 189 pounds and no longer needed knee surgery.

“I’m finally starting to tap into what makes me happy,” she said. “I’m learning that I love to travel — I recently drove across the country and it was the best thing I’ve ever done. I have so much more confidence now, and I’ll walk around New York City by myself. It’s so different when you take off those chains and you don’t limit yourself anymore.”