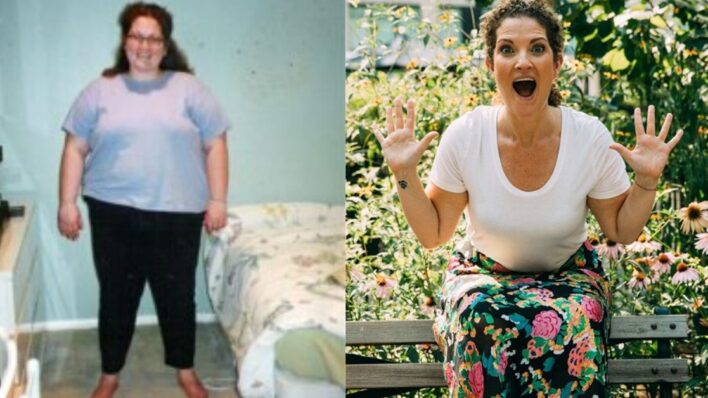 Molly Carmel spent years trying to lose weight without success but upon realizing her unhealthy addiction to sugar, things started to change.
By MJ Kelly    January 27, 2020

Molly Carmel spent years trying to lose weight without success but upon realizing her unhealthy addiction to sugar, things started to change.

Molly Carmel struggled with her weight most of her life, and it wasn’t until she started to closely examine her relationship with food that she finally got a handle on the problem.

She tried every exercise program and diet in the books, and even underwent bariatric surgery, but nothing worked for her in the long term.

The root of her issue is only too familiar

Molly eventually pinpointed the cause of her unsuccessful efforts to lose weight. “I would turn to sugar — of course I would. It soothed me, it numbed me, it comforted me,” Molly told TODAY.

It was my great love… I thought it was my solution when it was really my problem.

Like many, her unhealthy relationship with food dates back to childhood. She remembers going to the amusement park and running straight for the churros stand, and whenever she went to a friend’s house, the big motivation was eating cookies.

Worried that Carmel was “chunky”, her family put her on a diet when she was only 7, which turned out to be the start of a lifelong cycle of failed weight loss attempts.

It became harder to do perform daily tasks

At her heaviest, Carmel couldn’t tie her shoes and became short of breath after taking just a few steps.

“It was terrible,” said the CEO and founder of The Beacon Program, an eating disorder treatment center in New York and author of Breaking Up With Sugar.

Her weight soon became more than a physical obstacle. Her mental space took a toll, and she felt it too difficult to find the motivation or pleasure in life.

I was hopeless, I stopped seeing my friends, I stopped traveling, I was very reclusive at that time.

That’s when she decided to undergo bariatric surgery. The procedure helped her lose 100 pounds, but it wasn’t the answer to what Carmel described as a deep behavioral and emotional issue. Even after the surgery, she reached back to food for comfort.

She decided to do her own research

Inspired by her brother, who in the late 1990s had given up sweets at a time when low-fat diets were all the craze, Carmel started doing her own research into sugar.

After she realized she had a sugar addiction, she made up her mind drastically and gave it up cold turkey.

Having a track record of failures, she was afraid it would be just another fad diet, but when she started seeing positive results, she persevered.

Carmel avoided sugar for about a year and lost a total of 175 pounds, which she’s been able to keep off for almost a decade.

I don’t think I recognized what a true enemy sugar was. That’s the bait-and-switch that comes with sugar — the short-term. I never recognized that in the long-term, it was incredibly abusive and holding me back from virtually everything I was trying to do.

Today, she’s dedicated to helping others overcome their own battles with emotional eating and food addiction. Having undergone her own battle against it, and beaten it with success, she knows how difficult it can be. But she also knows that it is possible to come out victorious.

Before she went cold turkey…

It may have taken a long time for Molly to identify the real issue behind her inability to lose weight. Therefore, the important thing to do before making any change, whether it is big or not, is to take the time to research and understand the underlying issue.

Molly was able to reach her goal and a healthier lifestyle after taking the time to thoroughly understand what was at the root of her problem. When we want to achieve a goal, however impossible it may seem to us, it is always a good thing to do some introspection.

When we analyze our past, our responses to stimuli and events and what leads us to make certain decisions that do not benefit us, we have a clearer view on the solutions we need to implement.