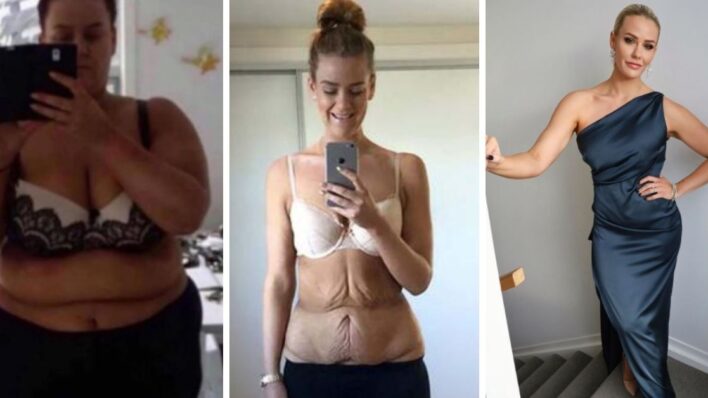 At 372 lbs, She Went From Struggling To Move Around To Being 200 lbs Lighter

At 23, Simone Anderson tipped the scales at 372 pounds and struggled to walk up her own driveway. It was time to make some changes.

At 23, Simone Anderson tipped the scales at 372 pounds and struggled to walk up her own driveway. It was time to make some changes.

When Simone Anderson weighed herself on an industrial scale at the warehouse where she worked, she finally got the wakeup call she needed to take charge of her health and transform her life.

At 23, she tipped the scales at 372 pounds and struggled to walk up her own driveway.

“I knew this was it, I knew I had to make a change, I couldn’t lie to myself or my friends or family anymore,” Simone, of Auckland, New Zealand, told the Daily Mail.

I had a food addiction and it needed to change, or I would be bed bound by 30 and have no life at all.

An accident disrupted her life

Simone grew up in a health-conscious home and was very active up until she broke her arm in a ski accident. At 13, she was stuck in a cast for six months, lost interest in sports and started emotionally eating.

Over the next several years, her relationship with food turned destructive. In a day, she often ate an ice cream cake or a pie for breakfast, doughnuts for lunch and later a high-calorie feast come dinner time, in the comfort and privacy of her home.

Despite several attempts to lose weight on her own in her late teens and early twenties, Simone wasn’t able to get a handle on her toxic eating habits and her weight gain spiralled out of control.

Once she realized just how bad she let things get and that her weight put her in the morbidly obese category, Simone made the decision to transform her life.

After hearing of a family friend’s positive experience with gastric sleeve surgery, Simone opted to get the procedure done.

She began her weight loss journey with an exercise program and a diet which helped her lose 45 pounds. Two months later, Simone got the surgery.

“Gastric sleeve surgery saved my life, I don’t believe I would be alive today without this life-changing surgery.”

Her transformation is nothing short of inspirational

Simone began documenting her journey on social media to keep herself accountable and in less than a year, she lost over 200 pounds.

‘I lost half my body weight, [but] my weight never defined me as a person, I was still the same bubbly, outgoing, driven and organised Simone but it definitely limited the life I could live,’ she said.

After being accused online of sharing a “fake” story, Simone made headlines after she revealed her post-surgery excess skin, for which she was planning to get rid of.

“I needed to show that yes, I do have loose skin, and it’s actually a side effect of something I am proud of. Obviously, I can’t wait for it to be gone, but it’s not something I’m ashamed of or embarrassed of,” she said at the time.

She traveled to the U.S to get several procedures done and has since learned to reimagine her eating and exercise habits.

Today, she wants to help others with her own experiences

In the six years following the start of her transformation journey, Simone’s social media following exploded, she met her now-husband, Trent Forsyth, published two books and is motivational speaker.

She hopes to continue helping others achieve their weight loss goals and is enjoying her new lease on life.

Simone discovered that the key to her success was to start from a place of self-love.

I found because my weight loss wasn’t from a place of self-hatred, it was coming from a place of purely wanting to get healthy for my future benefit, I feel like that sets you up for a really good journey.

“You need to be prepared for the side effects and all the hard work, but also know that it’s 100 per cent possible, and if you set your mind to it there’s nothing you can’t achieve,” she concluded.