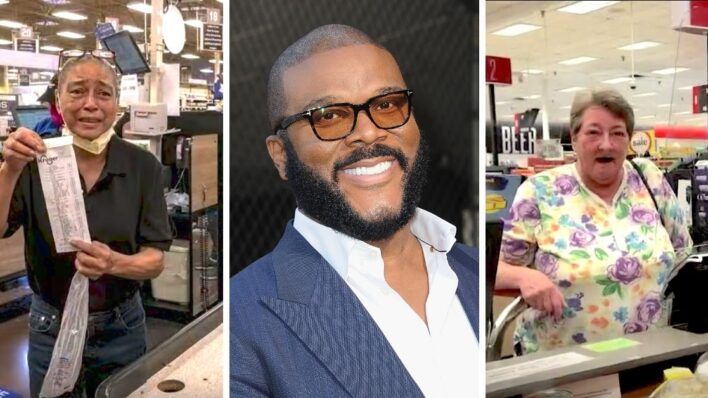 Tyler Perry made the day of thousands of Atlanta and New Orleans residents, especially senior citizens, by surprising them with paying their groceries. In a time where unemployment has been plaguing individuals, his actions are a remarkable reminder of the power of kindness.
By Aly Walansky    April 9, 2020

Tyler Perry made the day of thousands of Atlanta and New Orleans residents, especially senior citizens, by surprising them with paying their groceries. In a time where unemployment has been plaguing individuals, his actions are a remarkable reminder of the power of kindness.

Times have been rough to say the least, and for some more than others. Many have found themselves without a job, as employment has been suspended in order to prevent the spread of the virus.

Unfortunately, this means that many are struggling to pay their bills and make ends meet – and that includes being able to afford to put food on the table. This is especially true for vulnerable seniors, who often live on a tight budget with limited means.

But these high-risk shoppers were not forgotten

This week, movie producer, media mogul and actor Tyler Perry made sure to remember the elderly with a major contribution. He paid for the groceries of senior citizens at 44 Kroger supermarkets in his hometown, Atlanta, and 29 Winn-Dixies in New Orleans.

In New Orleans, Winn-Dixie shoppers were so excited to learn about Perry’s surprise. They received a slip of paper that read: “Random act of kindness. Present to cashier before 8 a.m.” Video shows them shocked and left smiling after learning their bills were covered.

Initially, the shoppers were not told who the generous donor was and were left perplexed by the incredible kindness they had just received. Instead, they were told that an “Atlanta angel is giving you your groceries.”

We walked in and the manager just had this huge grin on his face when he was handing out these pieces of paper.

Eventually, the word was out as shoppers had guessed the identity of their anonymous savior. Elizabeth Hunter, told CBS New Orleans affiliate WWL of her surprise.

She finishes and says ‘Oh, I want to let you know you don’t owe a thing. Tyler Perry is paying for your groceries this morning.’ I almost died! You hear about these things, but you never expect for it to happen to you.

“We would like to join our customers in thanking Mr. Perry for his kindness and generosity during this unprecedented pandemic,” Felix Turner, a Kroger spokesman in Atlanta, said in a statement. “It was truly a pleasure to see our customers fill with joy and gratitude.”

Tyler has been known for his charity work. In 2019, he paid for a murder victim’s funeral expenses, while ensuring her daughter’s school expenses were taken care of. After Hurricane Dorian ravaged the Bahamas, he paid for a private plane full of supplies to carry goods to the victims.

In 2018, he spent $400 000 to help Walmart workers during Christmas layaways. Needless to say that he is no stranger to giving back and helping others when they most need it.

At times when so many of us feel hopeless and don’t know how we’ll get by until everyone can get back to work, actions like Tyler Perry’s are an inspiration to us all.