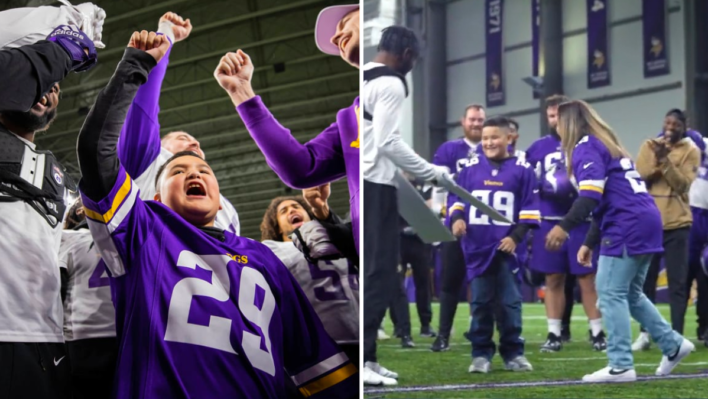 Amidst darkness and pain, acts of kindness can bring hope and positivity back into a child’s life.
By Luka Kopunovic    January 5, 2023

Amidst darkness and pain, acts of kindness can bring hope and positivity back into a child’s life.

Jordan Olivarez is a 10-year-old student of Robb Elementary, the school invaded on May 24, 2022. His mother, Virginia Vela works as an EMT and was one of the first responders on site that day.

Recently, Jordan and Virginia received a call from Minnesota Vikings player Kris Boyd asking them to join them at U.S. Bank Stadium for practice ahead of their game against the New York Jets. Boyd, a Texas native was moved by their story and wanted to do something special for Jordan and his mom.

Giving Jordan the Best Day Ever

Upon arriving at practice in their purple and gold #29 jerseys, Jordan and Virginia were greeted by Boyd and the Vikings squad, asking them to sign a pair of cleats that Boyd would later wear in the Vikings win against the Jets. At this point, Jordan was already seen smiling from ear to ear. “He was walking away from us at the team facility”, Virginia told reporters, “He was on his own. It looked like he was comfortable. It looked like he was feeling that he was safe.”

The positive emotion at U.S Bank Stadium didn’t stop there. After practice, Vikings Head Coach Kevin O’Connell called a team huddle where he announced the gift of a lifetime. He told Jordan and Virginia that he will be sending them to the Super Bowl this upcoming February. Jordan, an aspiring football player, was delighted by the news.

“I don’t even know what to say. It was amazing, the whole experience. I told them this is probably one of the best weekends I’ve ever had.” Boyd says, “Seeing the smile on Jordan’s face made me happy. Bringing him joy was the whole goal.” After practice, Kris and Jordan exchanged contact information in hopes to stay in touch throughout the Vikings season.

During the game between the Vikings and Jets, Jordan and Virginia were announced as the hometown heroes of the week. Receiving an ovation from the Vikings crowd.

Healing Trauma With Love and Kindness

Virginia recalls the weekend as a therapeutic experience for her son. “It’s amazing. I’m crying. My heart has not stopped pounding,” Virginia says, “I’m very grateful to Kris for doing this for my son.”

After an experience of a lifetime, Jordan has stated that he hopes to one day be in the NFL. He believes that when he becomes professional, he will be able to provide for kids the same way these players did for him.

Moments like this can shape a child’s future. What Kris and The Vikings did for Jordan was crucial after experiencing such a tragedy. Not only do acts like this help with day-to-day coping but also instil a positive outlook and exciting things to look forward to.

Now, Jordan has returned home to continue to pursue his dreams of being an NFL player and Virginia can rest knowing that her son is hoping to perpetuate the good that has been brought on to him.

Stories like this show that amidst darkness and pain, acts of kindness can bring hope and positivity back into a victim’s life. “We’re Vikings fans now.” Virginia adds, “We’re Kris Boyd fans.”