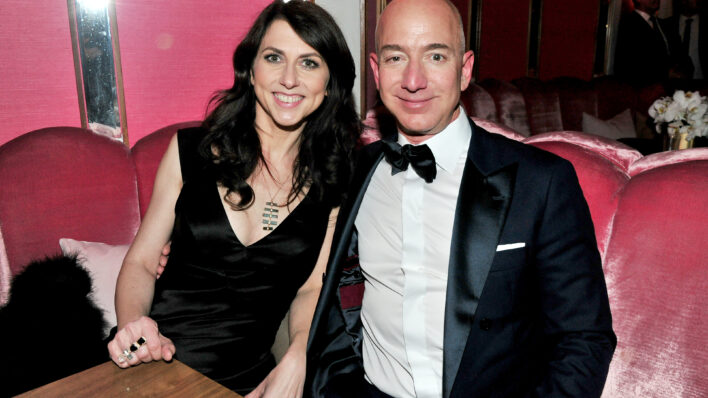 Who Is MacKenzie Bezos? Jeff Bezos’ Soon-To-Be Ex-Wife May Become the Richest Woman in the World

Sometimes it looks like a couple has it all, but no one knows what it’s like behind closed doors, even
By Aly Walansky    January 10, 2019

Sometimes it looks like a couple has it all, but no one knows what it’s like behind closed doors, even

Sometimes it looks like a couple has it all, but no one knows what it’s like behind closed doors, even for the richest and “luckiest” of people… Case in point: yesterday we got a glimpse into a seemingly charmed 25-year marriage that fell apart and the mess left in its wake — some are calling it the most expensive divorce in history.

We all know Jeff Bezos, he is the billionaire founder and CEO of Amazon, but we may not know his wife, MacKenzie Bezos. They’ve been together for 25 years, and she’s been championing Amazon since day one, but yesterday they shared a viral tweet revealing that they are in the process of divorce.

“As our family and close friends know, after a long period of loving exploration and trial separation, we have decided to divorce and continue our shared lives as friends,” the couple said in a statement on Twitter.

As Bezos is the richest man alive (worth a cool $137 billion!) and the couple reportedly had no prenup, their divorce could be one of the most expensive in modern history — and MacKenzie Bezos may just become the richest woman in the world.

The couple first met more than two decades ago at investment management firm D.E. Shaw & Co, where MacKenzie worked as a research associate, and Jeff was a vice president. In fact, their first meeting was when Jeff interviewed MacKenzie — a fellow Princeton grad — for her job at the firm.

“I think my wife is resourceful, smart, brainy, and hot, but I had the good fortune of having seen her résumé before I met her, so I knew exactly what her SATs were,” he joked to Vogue in 2013.

As it was a smaller office, once MacKenzie got the job, they worked together in the same office space. “All day long I listened to that fabulous laugh,” she told Vogue. “How could you not fall in love with that laugh?”

From there, things moved fast for the couple: MacKenzie asked Jeff out to lunch, and from there they were engaged within three months and married within six.

The following year, in 1994, they quit their jobs and moved to Seattle, where they founded Amazon. At that time, MacKenzie was hired as an accountant for Amazon, making her one of the company’s earliest employees.

But who is Mackenzie Bezos?

Depending on how their divorce plays out, MacKenzie Bezos may just become one of the largest Amazon shareholders, as well as the wealthiest woman in the world. Up until now, she has managed to live a relatively quiet life compared to her soon-to-be ex-husband. But who is she outside of Amazon? It turns out MacKenzie Bezos is quite the trail blazer in her own right:

The couple found huge success and before long owned multiple homes. But, they were surprisingly normal… But until 2013, MacKenzie still drove their four kids to school and then dropped Jeff off at work in their Honda. A family friend, Danny Hillis, told Vogue that the Bezoses “are such a normal, close-knit family, it’s almost abnormal.”

MacKenzie had her own career going on, too. She is a novelist. And Jeff was supportive of this. When she needs to write, she retreats to her own small apartment, where she writes until it’s time to pick the kids up from school. MacKenzie told Vogue that Jeff was her “best reader.”

He’d often drop other plans to read and carefully review manuscripts of her first novel, “The Testing of Luther Albright.” For MacKenzie’s second novel, “Traps,” she decided to not share her work with Jeff until she was finished.

“The sooner I finished, the sooner I could share it with him and talk about these characters who had been taking up so much space in my head,” she told Vogue.

MacKenzie founded the anti-bullying organization, Bystander Revolution, back in 2014. The organization aims to offer solutions to bullying — from a bystander perspective. As the executive director, Mackenzie’s goal is to get everyone involved in stopping bullying.

“It struck me that one of the biggest barriers to change is perception among bystanders – the idea that helping has to be hard.” she said in 2015.