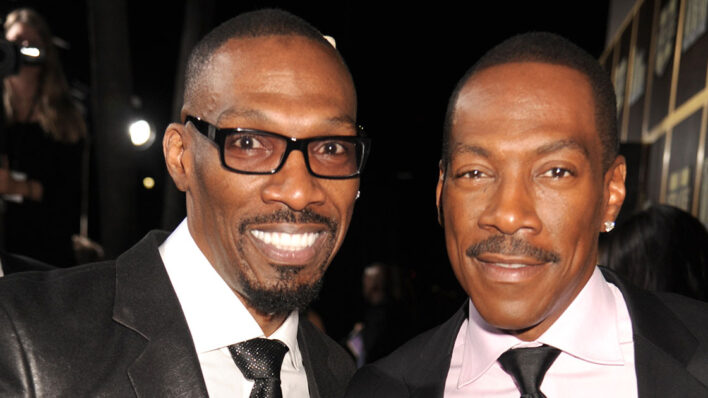 Why Eddie Murphy’s Movie is Dedicated to His Brother Charlie

Eddie Murphy’s new movie Dolemite is my Name features a dedication to his older brother Charlie. What legacy did Charlie leave behind for his brother?
By Emily Manuel    November 17, 2019

Eddie Murphy’s new movie Dolemite is my Name features a dedication to his older brother Charlie. What legacy did Charlie leave behind for his brother?

We all know Eddie Murphy— when we see the name, many iconic characters spring to mind, along with hilarious one-liners and physical comedy. You may know him for stint on Saturday Night Live, his string of hit comedy films in the ’80s and ’90s, his Golden Globe-winning turn in Dreamgirls, or even his groundbreaking standup career.

But what about Charlie Murphy?

Eddie Murphy’s older brother Charlie was a standup comedian, actor, and screenwriter in his own right, best known for his performances in Dave Chappelle’s iconic sketch TV series Chappelle’s Show.

Experts within the comedy industry laud Charlie as one of the most under appreciated talents in the scene, with director Craig Brewer saying, “”He may not have been as famous as Eddie, but he was a really talented and funny cat.”

If you don’t know Charlie Murphy’s name, then you likely have no idea that he died in 2017 after a battle with leukaemia. Or that Eddie Murphy’s comeback film My Name is Dolemite is dedicated to his memory.

What else don’t you know about Eddie and Charlie Murphy?

The Murphy brothers’ childhood ended sooner than most, with their parents’ divorce when Eddie was just three years old, followed by his father’s murder five years later.

Neither Charlie nor Eddie had it easy growing up, but older brother Charlie stepped up to serve as his little brother’s protector whenever he could. Eddie was understandably traumatized by the loss of his father, but Charlie did his best to be Eddie’s rock.

When their mother became so ill that she had to be hospitalized for months, Charlie and Eddie were put into foster care. Thankfully, the brothers were not separated, but they spent a year in the system before being returned to their mother’s care.

Despite their tough childhood, Eddie credits the hard times with developing his razor sharp wit and wicked sense of humor. While Eddie turned to the standup comedy scene to channel his pain, Charlie was drawn into gang violence. Eddie was without his brother for the first time when Charlie was sentenced to 10 months in prison. Charlie credits his mother with helping him clean up his act, as she encouraged him to join the military.

As Eddie’s star rose, Charlie was stuck in the shadows

As Eddie rose to the top of the comedy scene, Charlie reclaimed his role as his brother’s protector by serving as Eddie’s head of security.

While he loved being able to support his brother, Charlie’s own creativity was being stifled in the role. He recalled, “I was there for the person I loved and the people around him didn’t like it. Being there to support someone else is cool if you’re a troop but I’m a general. I like being out in front. I left shortly after that happened and wrote my first film script.”

Eddie was also moving away from standup and into the world of Hollywood, but Charlie found his place as a sketch performer with Dave Chappelle. He turned his role as an observer behind the scenes into the Chappelle’s Show‘s now iconic “Charlie Murphy’s True Hollywood Stories” segment.

The stories he wrote and shared about Prince and Rick James are still referenced daily— often by people who have no idea who they originated from!

Charlie stepped into a spotlight of his own making

With the abrupt end of Chappelle’s Show, Charlie took advantage of the challenge of making ends meet– turning it into an opportunity to test himself on the biggest dream he’d always been afraid to chase: he set out to be a standup comedian.

Though Eddie hadn’t performed standup in two decades by that point, his shadow still loomed large over Charlie. “When I first started doing comedy, I was 42 years old and I was the brother of one of the most celebrated comics in history who made his name in the game 20 years earlier. So, that took a lot of bravery,” he said.

Once he set his mind to it, Charlie slowly but surely made his way up through the world of standup, earning the respect of iconic comedians such as Chris Rock and DL Hughley. Of course, his greatest admirer was his little brother.

“Eddie sometimes comes to my shows. He’s proud of me. He talks about doing stand-up himself again but he’s hesitant after all this time. He doesn’t want to be compared to me,” Charlie told Metro.

Charlie’s legacy for Eddie– and for us

In 2017, Eddie’s protector finally faced the one battle he couldn’t win: cancer. He left behind a long career of writing, standup, and acting, along with two daughters.

Eddie mourned his brother in private: “Charlie filled our family with love and laughter and there won’t be a day that goes by that his presence will not be missed.”

He also found a way to honor is brother creatively. He produced and starred in My Name is Dolemite— a movie about the comedian Charlie had introduced him to– and dedicated the movie to Charlie’s memory.

Even more significantly, Eddie resolved not just to return to live sketch comedy by guest hosting Saturday Night Live, but also decided to make a return to standup up, three decades after his last iconic run– and three years after Charlie’s death.

Both brothers stories are powerful lessons about tackling the dream you’re most afraid of pursuing, not to mention never letting egos get in the way of family or your passion.

Charlie protected his brother until he realized it was time to stop playing defense. Then he was able to live his dream.

I’ve never felt like I was living in anyone’s shadow. My life was what it was. I was always proud of my brother. He helped me tremendously, but we’re family so we were never in his shadow.