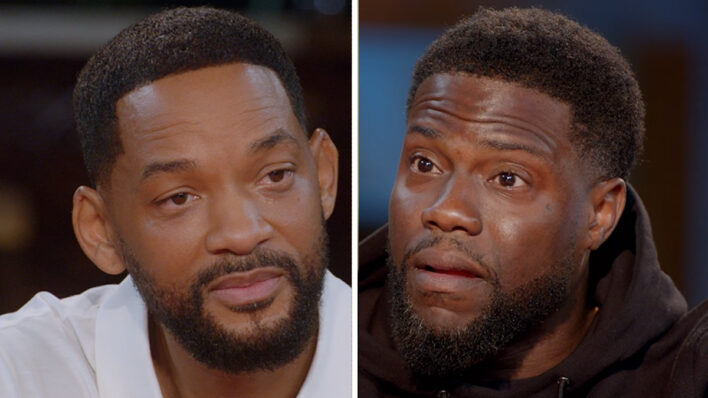 Kevin Hart And Will Smith Get Brutally Honest About Fatherhood Failures

Parenthood is a beautiful phase of life to be in, but not without its complexities. Mothers and fathers have to balance many different factors all at the same time, while consistently prioritizing their children above all else. There is a learning curve, and while some get to undergo the learning curve in private, others experience parenthood under the watchful eye of the public.

Fatherhood has its distinct challenges, challenges which no dad is exempt from even if they’re famous. Except, if you are an A-List celebrity, the whole world knows about your missteps.

On a Will Smith takeover of Red Table Talk, Kevin Hart and Will both open up about their experiences as fathers, specifically focusing on their shortcomings and the lessons taught by their children. Kevin, who has recently released the movie Fatherhood on Netflix, exhibits incredible growth as a parent, husband, and individual.

The Father’s Day RTT episode begins with Will waiting on Kevin who is over an hour late for the interview. Will jokes that because of Hart’s tardiness he is going to ask hard-hitting questions, and in the end, Smith stands by his word.

The deep conversation between Will Smith and Kevin Hart delves into what it really means to be a father, particularly in the spotlight. Kevin has been in his fair share of media scandals, most notably when he cheated on his then pregnant wife Eniko Hart. Hart’s other notable scandal was when he stepped down as host of the 2019 Oscars due to past comments made offending the LGBTQ+ community. These very public events have brought into question Hart’s integrity as a family man, in addition to his overall character as well.

Will starts off the talk by asking Kevin what he thinks “the values” are that “constitute a good father.”

Being different from mine. Like, I had a bad father. No disrespect to my dad, ‘cause I know he’ll see this…My dad wasn’t the best father.

Kevin describes his experience with his own father saying that his dad used drugs, was absent, in jail, and not around because of his relationship with Kevin’s mother.

Kevin reveals, “Me and my brother knew my dad was on drugs. And that’s, that’s tough.”

Will shares his relationship with his father saying that it was “rough,” and adding, that it was a “serious military household.” Smith shares childhood trauma saying that he used to “watch my father bust my mother in the head and knock her down.”

Hart adds, “I see the mistakes my dad made, and I’m just trying to be better than that.”

Kevin’s children opened his eyes – and he really needed it

Referring to his past scandals and media storms, Kevin says of addressing the controversies with his children, “you’re never prepared for that side of it.”

Kevin begins discussing the accountability his children represent for him. He reveals, “I can say having a little girl in my life… it’s tough. You don’t realize the impact that your mistakes can truly have. When the kids get involved, it’s a different feeling, it’s a different opinion, it’s a different emotion.”

Then Kevin clarifies there is an exception to affecting him emotionally, and that is through his children. He explains, “But, when your child shows disappointment, shows emotion, shows ‘I don’t understand, why?’ And, you gotta have those conversations, well, now head drops for the first time. And now you realize that there is a different emotional cord that can be pulled on you that nobody else has the privilege of ever touching, and my daughter touched on that cord, man.”

Until this day my daughter is tough on me…

Will then shares that he and Jada have chosen to be very open with their children about “their realities.” They tell their kids “everything,” and try and get ahead of a media storm, but at times they have fallen short.

The struggle between fathers and daughters

As we grow older our relationships with our parents evolve, but the father-daughter relationship has its specific characteristics that are sometimes universal. There is often a struggle within fathers between letting go of their daughters and respecting their right to explore life with independence, and balancing expressing their often natural protective instincts.

Hart and Smith reveal this struggle to be a challenge for them as girl dads, particularly in the limelight. They discuss their concerns of properly equipping their children for the harsh realities of life given the comfortable environments they have raised them in. Regarding their daughters, Hart and Smith are both concerned about unwanted male attention just like many fathers out there.

Regarding the LGBTQ+ community scandal, Kevin reveals, “my daughter was so upset, because she couldn’t process how people could think this about her father.”

And, it was so tough because this is when I started to realize how my fame has an impact on my household.

Kevin had to see things from a new perspective. He says, “I had to really understand my daughter’s side. My daughter had a talk with me about her mother that rocked me, she checked me! She said, ‘I want you to stop saying…because when you say these things dad, ‘this, and this and this…’”

Kevin reveals that Heaven essentially woke him up to his insensitive ways.

He says, “It took me a minute to understand that. Now I can honestly say, the relationships have improved because I am now aware of the shit that I could have done to bring havoc or bring problems.”

Will asks Kevin what he has “learned over his 16 years as a parent,” and Kevin jokes that he is going to cry as he tries to answer the question.

Then Hart displays incredible personal growth saying, “You know Will, what am I learning should be the question because, you’re constantly learning. I’m 41, I’m getting older, I’m getting more mature, and the biggest lesson to date is just learning to listen. I was a late bloomer to the listening side of it. I was taught to say what I wanted to say.”

Kevin reflects and says, “I wish that I would have arrived at this space in my earlier years, and I just would have been able to handle a lot of different situations differently. There’s a lot of people that were probably misunderstood, there a lot of relationships that were lost because of the way that I handled stuff. You gotta listen, man.”

While Kevin Hart has had more than one media snafu to date, it is evident through his uncensored, unfiltered, and emotional talk with Will Smith that he has grown.

The powerful bond between a parent and their child is subject to change over the years. We are so close to the ones we love, and in reality, we hurt those people the most. Whether you live a very public life or a private one, our mistakes can often swallow us up emotionally if we do not choose to grow from the experience.

Choose growth and watch your relationships flourish. If there’s anything to learn from experiencing failure it’s that there is always a valuable lesson inside. It is human nature to err but it is a choice to learn.

The choice is yours.