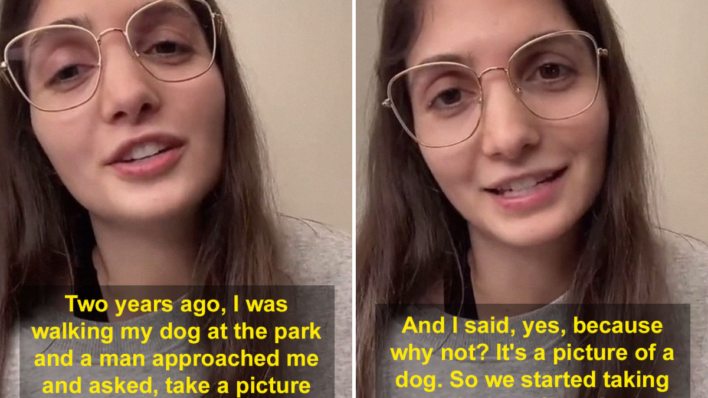 A viral TikTok video is part of a growing conversation about women’s safety on the streets in the wake of
By Joel Balsam    March 17, 2021

A viral TikTok video is part of a growing conversation about women’s safety on the streets in the wake of Sarah Everard’s tragic disappearance.

TikTok user @heysheybae was doing the most normal, and seemingly safe thing possible — she was walking her dog in a park in broad daylight. But in a video posted this week, she explains how as a woman, she was unfortunately still at risk.

“Two years ago, I was walking my dog in a park and a man approached me and asked [to] take a picture of her,” the video begins.

She said ‘yes,’ because dogs are cute and deserve to be photographed. But then she realized something was wrong. The man wasn’t taking a photo of the dog, but of its collar which had her address on it.

“So I told him that I actually didn’t feel comfortable with him having a picture of my dog, and I asked him to delete it.”

Simple enough, right? She wasn’t feeling comfortable so she asked for the man to delete it — in other words, she said no.

He wouldn’t delete the pic

In a second video, heysheybae explains how the man proceeded to delete the photo and walk away, really quickly.

“And I was like, excuse me sir,” she recalled. “Could you also go into a deleted album and delete it from there?”

But the man protested. “I don’t have a deleted album,” she recalled him saying.

But her quick-thinking helped again — she noticed he has an iPhone and thus a deleted picture folder.

So she continued to try and convince him to delete the photo as he tries to walk away.

People in the park started staring, and the guy finally said “fine.”

He looked down at his phone, did something for a second and said, “There, it’s gone.”

Heysheybae asked for proof, and after some more debate, he let her see his phone. Of course, there the photo was, still in his deleted folder. So she asked him to delete it once and for all.

“What if I hadn’t noticed that he took a picture of my address,” heysheybae wondered aloud. “And what if I went home and then that night I took my dog out to pee, he was outside waiting for me. I mean.”

Sadly, this story is far from unique and many other women have been posting about how their quick thinking helped them out of these kinds of situations.

Can I talk to the men out there for a quick second? Guys, we have to step up. We have to do everything possible to make women feel comfortable out there because we’re all human beings and in no case, not ever, no matter what she’s wearing, is a woman ‘asking’ to be harassed.

Thankfully, more women are speaking out and sharing their situations, but sadly, situations like this and what happened to Sarah Everard prove that we still have a long way to go.