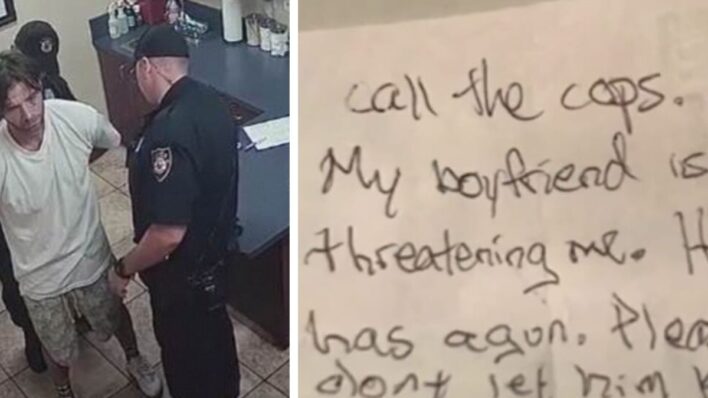 One woman used her wits and the help of an alert receptionist to escape an abusive hell, and it’s all
By Bryan Liquor    March 21, 2021

One woman used her wits and the help of an alert receptionist to escape an abusive hell, and it’s all captured on tape.

It had been two days of terror for 28-year-old Carolyn Reichle of Volusia County, Florida.

According to police, she’d been abused, threatened and physically prevented from leaving her home by her boyfriend, 39-year old Jeremy Floyd. At one point, Reichle tried unsuccessfully to take the gun from him, causing the weapon to go off twice.

After spending an entire day in bed with a head injury, Reichle had an idea about how she could escape her abuser. She told Floyd that their dog was ill and needed to be taken to the DeLand Animal Hospital.

Miraculously, he agreed, but insisted on going with her. The entire ride, he held her at gunpoint, threatening her and her family.

CCTV footage shows Reichle and Floyd entering the vet’s lobby along with their “sick” dog. With her boyfriend walking ahead, Reichle saw an opportunity and discretely slipped the receptionist a note.

“Call the cops. My boyfriend is threatening me. He has a gun. Please don’t let him know.”

Once she read the note, the receptionist waited until the couple was out of sight and immediately called the police.

Not long after, four officers entered the animal hospital. They arrested Floyd and seized the loaded gun hidden in his waistband.

Meanwhile, Reichle was taken to an area hospital and treated for a head injury, a black eye and bruised arms.

Unfortunately, Floyd’s reign of terror continued, even while imprisoned. In an update posted by police, he tried to contact Reichle over 40 times while awaiting trial. He then used a fellow inmate’s phone to leave her a voicemail.

Domestic abuse is real, terrifying, and on the rise.

The warning signs aren’t limited to bruises and screams. It might be a disturbing call to Disney, a subtle sign to a locksmith, or even a silent scream at a McDonald’s drive thru.

While Carolyn Reichle’s clever ruse might have arguably saved her life, it also takes people like the receptionist to pick up on red flags and lend a helping hand.