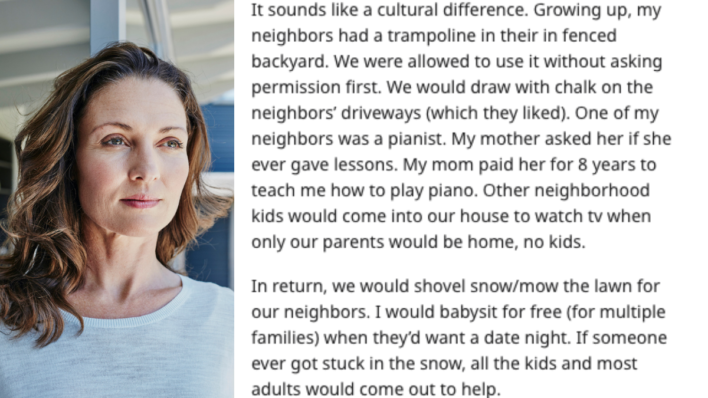 Woman Kicks Neighbors’ Kids Off Her Yard, Tells Parents To Get Bigger Home

In a time when everyone is supposed to be coming together, a Reddit user thought it best to not only
By Joel Balsam    June 11, 2021

In a time when everyone is supposed to be coming together, a Reddit user thought it best to not only reject a hard-working mother from letting her kids play in her yard and pool, she thought it necessary to tell the neighbor to move someplace bigger.

She kicked the neighbors’ kids off her yard

A Reddit user who identified as a 26-year-old living in her “starter home” posted to an AITA forum about a dilemma she was having with her neighbor. In the post, she described coming home after a weekend away to find the neighbors’ kids playing on her yard.

“A couple weeks ago my husband and I went hiking over the weekend. When we got home Sunday, I saw the neighbor’s kids playing in my yard,” she said, according to Little Things. “They were riding their bikes in the driveway and seemed like they’d been playing in the yard since some toys were there.”

The Reddit user told them to leave and brought the toys in the yard to the neighbor. Then, she asked the neighbor to make sure the kids didn’t play in my yard again.

The neighbor apologized and said she had just been happy for them to get out of the house while she was cleaning.

“I thought no problem, end of story,” wrote the Reddit user.

No, the kids can’t play in the pool on a hot day

But that wasn’t the end of it.

“Well, last week when I was in my garden my neighbor (kid’s mom) came and said hi. She asked if it would be okay if the kids could use my pool since it doesn’t seem like it gets used much anyways. She said she’d supervise but the kids have been wanting to go swimming but they can’t cause of [coronavirus] restrictions. I told her I wasn’t comfortable with that, even if my husband and I were home at the time. She seemed to understand and she let it go.”

“I’m really disappointed in the disrespect for parents. It takes a village to raise kids, and we should support each other in this troubling time. Children need places to play and grow! When I first moved here I hoped this to be a neighborhood for young growing families. I’m just overall disappointed in how some members of this community aren’t keen on being friendly to children.”

In response, the Reddit user posted a comment saying, “Maybe you should have gotten a house with a bigger yard if your kids want to play.”

A few hours later, the neighbor texted her saying she was hurt by the comment.

For some, the Reddit user asking the question was in the right a.k.a. NTA — the owners of the people would be liable if the children got hurt or drowned in the pool and could be sued.

But many said the user was immature and perhaps even classist for telling the neighbor to move someplace else.

“The appropriate move would have been to message her privately and directly. Now you’re really not that much different than her,” a popular comment said.

“Gentle YTA for classism,” wrote another. “You have every right not to want your neighbor’s kids in your yard for liability reasons, but I think you are being unintentionally classist with your language. You think that woman wouldn’t have gotten a house with a bigger yard or a pool if she could afford one? It’s awesome that you have a house at 26, and good for you that you intend to get a larger/nicer one in the future, but what you consider a “starter home” is something many, many people will never be able to afford.”

In response, the user edited the post, admitting she shouldn’t have left the rude comment but stood firm on not allowing the neighbors to play in the pool.

What kind of society do we want to live in?

For what it’s worth, I think the poster was definitely TA. In normal times, maybe it’s fair to draw the line, but these aren’t normal times. Millions of children have been forced to stay home due to coronavirus restrictions, and public services like pools have been closed. To ask a neighbor for a one-time favor in extenuating circumstances is completely fair, and makes a better neighborhood for all. Sure, there’s a liability issue with the pool, so it’s probably a good idea to only let the kids swim if you’re home, but doing a favor for a struggling mom in such difficult times is really the least you can do.

At the end of the day, this is a difference in perspective between someone willing to share and someone who stubbornly say what’s mine is mine. I don’t know about you, but I’d rather live in a society that encourages sharing and helping others rather than a selfish one.