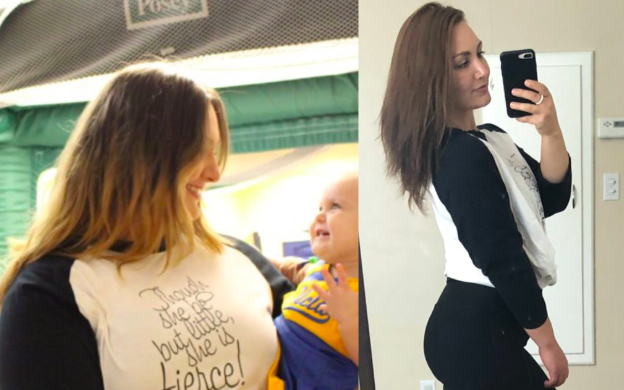 Woman Loses 85 Pounds While Caring for Her Critically Ill Daughter, Blows Us Away with Her Tenacity

When Melissa LeBlanc’s one-week-old daughter, Riley, was diagnosed with a life-threatening disease, her life became completely centered around her newborn’s
By MJ Kelly    August 10, 2018

When Melissa LeBlanc’s one-week-old daughter, Riley, was diagnosed with a life-threatening disease, her life became completely centered around her newborn’s

When Melissa LeBlanc’s one-week-old daughter, Riley, was diagnosed with a life-threatening disease, her life became completely centered around her newborn’s medical needs.

Riley had Severe Combined Immunodeficiency (SCID) which means she was born without an immune system. “She had no way to fight off any sort of infection,” said LeBlanc. “Something as simple as the common cold could have taken her life.”

Shortly after the diagnosis, LeBlanc found out that her daughter would require chemotherapy and a bone marrow transplant to survive.

They were in it together “My life quickly became extremely sedentary, being forced to live in strict isolation with my daughter to keep her safe and healthy while waiting for her transplant.”

After waiting a year, Riley finally got the operation but could only start coming out of isolation six months after the procedure.

LeBlanc became consumed with worry over her daughter’s wellbeing and this led her to rapidly gain weight.

One day while her daughter was still recovering from chemotherapy and her bone marrow transplant, LeBlanc began experiencing stomach pain so severe, she had to go to the emergency room.

“I neglected myself for so long, it was now affecting my ability to care for my daughter who relied on me,” said LeBlanc.

Riley had never been left with anyone other than her parents. LeBlanc was terrified of having to leave her baby with someone else but had no other choice. And in that moment, something clicked. “I knew I needed to stop playing the victim and change how I was letting my circumstances control me,” she said.

LeBlanc realized that if she wanted to continue fighting alongside Riley, she was going to have to take care of herself first.

Growing up and in early adulthood, LeBlanc lived a very active and healthy lifestyle. She was a competitive gymnast and cheerleader. In her early twenties, she worked as a personal trainer.

“I felt scared. I felt embarrassed that I even let myself get to that point coming from a fitness and health background, I knew better,” she said.

More than that, she felt ready and determined to take her health back, so that she could really be there for her daughter.

The transition was difficult for LeBlanc and sometimes, it felt selfish, but she knew she couldn’t keep going on this way.

RELATED: Your Worth is a Birthright (and the Truth About Why You’re So Busy)

“I was so tired of being sick and tired that I didn’t give myself the choice anymore.”

Adversity helped her realize all that she’s grateful for She started going to the gym and exercising again. She made changes to her diet, and hasn’t stopped making progress since.

LeBlanc has lost a total of 85 pounds so far, and is extremely proud of how far her and her family have come.

“I remind myself every single day that I have so much to be thankful for, because things could have turned out very different for us,” said LeBlanc.

“Even in the midst of adversity and on the darkest of days, there is still so much hope and so much to be thankful for. Life is a precious gift.”