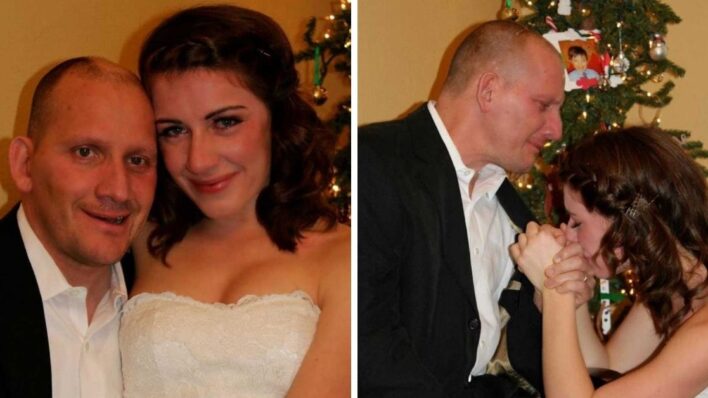 Woman Gets Her Father-Daughter Dance Before Dad’s Passing

Anna McParlan tells the incredibly touching story of her father’s last days and the inspiring lesson she got from his resilience.
By Kawter    September 3, 2020

Anna McParlan tells the incredibly touching story of her father’s last days and the inspiring lesson she got from his resilience.

We don’t truly know how much time left we have with someone in this life, which is why it’s important to cherish every moment we get to spend with our loved ones.

When Anna McParlan’s father was diagnosed with cancer, it turned her life upside down–but she also made the most of the time she had left with him. Her incredibly powerful story reveals another facet of loss and love.

Her father had fought against his cancer for 14 years

Anna’s father had suffered from brain cancer for 14 years, and had already had 2 tumors removed with success. However, the illness was still lurking like a threat.

But the reality was Dad’s sickness still hung like a heavy storm cloud and we were unsure of whether what would come next would be a sprinkle or a downpour.

Anna McParlan in Love What Matters

Anna wanted to be there for her father. And so, she stayed “in our sweet hilly town on the frigid shores of Lake Superior, waitressing tables at a local Mexican restaurant.” Her father would not have approved of her wasting a good GPA just to be near him. So, Anna told him she was just homesick and “needed a gap year to keep his lectures at bay.”

That fall, Anna’s family was given devastating news. Her father’s tumor was back and needed immediate surgery.

But the surgery went wrong…

Anna and her family were convinced that he would pull through. After all, “He was known for defeating every odd.” When they entered his room after the surgery, they expected to see him strong and ready. Instead, the sight that greeted them was devastating.

When closing up from Dad’s surgery, they nicked a vein, causing a stroke — leaving our larger-than-life father, husband, friend paralyzed on the left side and unable to move or speak.

Seeing her father in that state was heartbreaking. “He was trapped in his own body, unable to fix the problem, and only able to translate every fear through the look in his wide eyes,” Anna continues. “Hot tears rolled down his cheeks, his left hand lay limp as we grabbed hold of it, and he let out a wail.”

Her father went from “brain cancer patient to a stroke survivor”–and that meant they needed to adapt to his new needs. He needed to learn to walk and talk again, to re-adapt.

Watch this Goalcast video if you need strength after trauma:

In that transitional stage, her relationship strengthened

Anna had been dating David, a boy she had a crush on in high school. While they had not reached a serious stage in their relationship, her father’s new condition made them grow closer.

But when Dad’s surgery went wrong — who was the one who picked me off the cold hospital floor? He was. He drove the 2.5 hours back and forth between work shifts, almost daily, just to sit and hold my hand in hospital rooms.

One day, while Anna and David visited her father at the hospital, the latter asked for a white board. “My dad couldn’t talk and as a man of many words and opinions, this agitated him,” Anna said. “We were all desperate to hear his voice and hear his opinion.”

On the white board, her father wrote “When are you going to her ask her to marry you?” And while the question was very forward–and made Anna feel like it might have ruined her chances–they “all knew it then and there.”

The man taking care of me was the very one Dad had spent all those nights praying for.

The cancer was still there

Her father was placed in a rehab unit but the brain cancer was not gone. “The biopsy had confirmed it was aggressive,” Anna said. Her dad’s friend, a therapist, then asked him the question they all had in their mind.

The cancer isn’t going anywhere. You have lost your ability to speak and walk. So Patrick, what now?

Her father grabbed the whiteboard again and wrote these touching words: “I CHOOSE JOY!” And so, Anna and her loved ones honoured his words, despite how difficult it was to do so. “It felt like a foreign language at first but soon, it would become our native tongue,” Anna beautifully writes. “Instead of anger or fear, joy was going to take center stage and get the loudest microphone.”

Anna and her family held hope against all odds but eventually, they received the dreadful news. Her mother gathered them all at the house to break it to them.

“The cancer has spread from the left side of the brain to the right. The doctors have exhausted all efforts. We’ve decided we’re going to finish Dad’s race this side of heaven together at home.”

She decided she would get her dance with her father

“It became apparent the dream I carried in my tiny adolescent heart of my dad walking me down the aisle wasn’t going to be my reality,” Anna said.

She and David had postponed their engagement so she could spend time with her family. And while her father would not make it to the wedding, it didn’t mean that she couldn’t have a precious memory to last her a lifetime.

Her mother, “like the fairy Godmother she is” then decided to send her a wedding gown with overnight shipping. They would re-create the father-daughter dance despite all the suffering. Again, they chose joy over pain.

Anna put her dress on and applied waterproof mascara. She curled her hair herself. In the meantime, her mother was helping her father dress up in his suit. It wasn’t perfect but, as Anna said, “it was heart and soul packed into a few holy moments.”

Brain cancer had robbed us of a lot of moments, but it couldn’t rob us of our final dance.

All his work in physiotherapy had given him enough strength to dance with her one last time. “We laughed with swollen eyes. Stepped on each other toes to Sinatra. Sobbed hysterically. Made promises he’d still walk me down the aisle,” Anna wrote.

Her father’s memory still lives on

Anna and David received their foster care license on her father’s birthday. And they continue to honor his memory. Inspired by his strength and his determination to choose joy over pain, Anna reveals:

We’ve also raised half a million dollars in honor of his legacy — choosing joy, spreading hope, and ending hunger for children in our community through Project Joy.

Project Joy is a powerful initiative that aims “to raise awareness of and funds for childhood hunger relief.”

Tragedy will change you–but you can choose how

Anna reveals what she would tell her 18-year-old self and it is something that can inspire us all.

Sweet sweet girl. Do not be afraid. Yes, you will learn to face death in the days to come. But what you will actually do is learn to live. To choose joy.

Death and suffering are an integral part of life. While trauma needs to be addressed the proper way, we must also believe that we can choose the more positive and productive path to recovery.

Anna’s incredible story shows that losing a loved one does not mean that they are gone forever. So long as we continue to honour their memory, they will always remain a part of our lives.