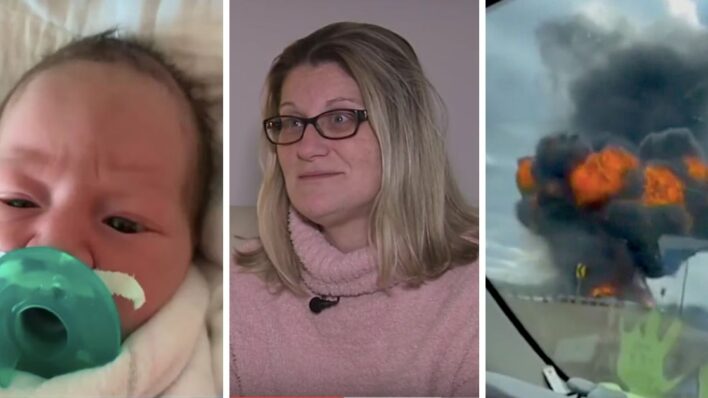 In one week, Holly McNally showed incredible heroism by delivering her baby on her own and then saving a man’s life from a deadly fire.
By Aly Walansky    March 5, 2020

In one week, Holly McNally showed incredible heroism by delivering her baby on her own and then saving a man’s life from a deadly fire.

Humans can be so surprising in their capacity to show courage and strength. Really, there’s no telling what we are capable of. For example, delivering our own baby and then rescuing a man from a truck on fire just a few days later!

This sounds like the plot of some absurd Hollywood movie and yet, it is the very real story of a woman in Indiana who ran toward a fiery crash and saved the driver only seconds before the truck exploded. And that wasn’t even the first miracle she had performed that week!

She was returning home from seeing her newborn

Holly McNally had just given birth to her fourth child just a few days before she rescued a man who was covered in flames after his truck that was carrying jet fuel overturned on a highway.

The terrifying incident unfolded just before 2 p.m. on I-465 South’s ramp heading towards I-70 East, according to the Indianapolis Fire Department (IFD).

McNally was actually on the way home from visiting her newborn son Connor in the NICU with her mother, when she saw the terrifying scene of the accident.

“I pulled over on the side of the road,” she recalls. “I see people videotaping and watching what is going on, so I knew something big was happening, but I wasn’t sure what.”

Once she got out of her car, McNally says she saw “a semi-tanker just engulfed in smoke” and “a man running out of the smoke, covered in flames. Head on fire, hands on fire.”

There was no second thought

Holly then decided to take action. Nobody else seemed willing to help the poor victim. Holly’s mother only told her “don’t run” and then she was gone.

I look at my mom and I said, ‘I’m going over there because nobody else is doing anything.

What she found in the scene was terrifying. The fire had already taken hold of the vehicle and hurt the driver,  Jeffrey Denman, 59. “His skin was dripping, he had no hair, his lips were gone,” Holly reports. “And I just told him, ‘It’s okay, you’re alive, you’re breathing … you’re gonna be okay.’”

Within 30 to 45 seconds of their escape, the car was hit with second explosion of flames.

She was then joined by another good samaritan, who brought a jacket to put out the fire on Jeff’s body. Both Holly and her new helper carried Jeff away from the truck.

Within 30 to 45 seconds of their escape, the car was hit with second explosion of flames. It was a close class.

It was that quick, between being here and not making it home to my babies.

Despite the obvious danger, at no point did Holly think of backing away from the poor victim, who now owes her his life. “You don’t run away and leave this man here. You don’t do that,” Holly reflects. “That’s inhumane to me.”

Yes, Holly’s actions were abnormally courageous but Holly admits that she was not without fear.“Don’t get me wrong though, I was scared,” McNally admits.

I remember saying, ‘If I go to heaven, at least I’ll go over doing a good deed.’ I’m hoping my children are taken care of. That’s what kept me going, getting back to my kids. That was my driving force.

As if her week hadn’t been crazy enough

Holly’s week had already started on a wild note. Not only did she deliver her newborn–but she had to do it without a doctor.

“He came 26 minutes after my water broke,” she explains. “The doctor was on his way to the hospital and the emergency room doctor did not make it to my room in time, so it was just me and a nurse.”

And much like she extricated Jeff from a deadly fire, she helped her fourth son out on her own. “My mother watched me put my hands down there and pull little man out and lay him on the belly,” she says, adding that her son is now being treated in the NICU for some blood that showed up in his brain on a scan, but that they’re hoping he’ll be home on Monday.

Her mother instincts helped them out

Holly credits her instincts as a mother for her bravery.

Being a mother you have instincts and it was one of those things where it was like if I don’t stay calm and I don’t take charge and don’t hustle, we’re not gonna make it out.

And just like that, she went from bringing a life into this world to saving another from death. Her incredible courage leave us with a very important lesson on the power of selflessness.

Holly leaves us with these wise words, “Kindness goes a long way. … It doesn’t have to be saving somebody’s life, but anything that you can do for someone to help them in any way, make sure you do it.”

Indeed, kindness does not have to be a huge gesture, like saving a man from a deadly fire. It can be applied everyday, as any action, whether small or large, can change the world for someone.