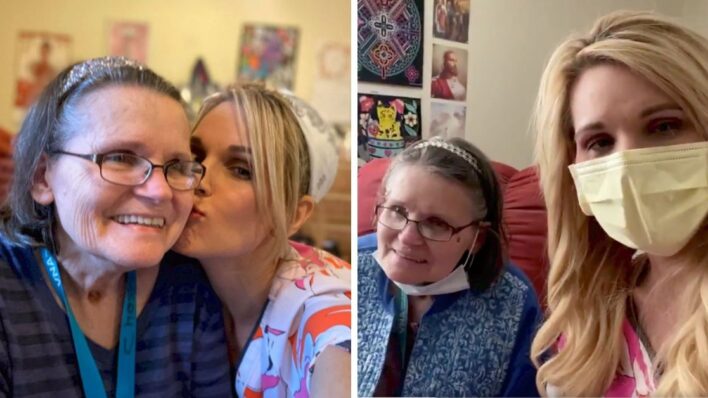 Janie Kasse found a way to visit her mother and cheer her up at her nursing home during the quarantine by getting hired as a helper.
By Aly Walansky    May 7, 2020

Janie Kasse found a way to visit her mother and cheer her up at her nursing home during the quarantine by getting hired as a helper.

Janie Kasse has had a ritual for several years. Every weekend, she would visit her mom’s assisted living facility and take her out for the day. They would go out shopping or eat at a restaurant, but regardless, they’ll always spend that day together.

But that all changed recently, as the assisted living facility, in a countrywide effort, had to close its doors to visitors due to the coronavirus pandemic.

Her mother’s spirits were low

On New Year’s Eve in 1976, Carol suffered a traumatic brain injury in a car accident, when Janie was just a baby. While Carol did learn how to speak and walk again after the injury, she was never able to read or write like before. Additionally, her memory skills had taken a blow.

She definitely knows who I am and knows my name for sure, but everyone else there, she could not tell them their name. She does not know people she sees every day.

Janie heard that her mom was having a hard time with the changes at the facility, including the new rule stipulating that the residents had to stay in their rooms.

“She’s incredibly social,” Janie said of her mother. “She was getting really moody and angry and depressed, but the staff would tell me that if my mom talked to me on the phone she was happier and she would listen to me.”

So Janie had an idea

So, Janie had an idea that would allow her to see her mom. She decided to get a job at the facility. She first tried to apply as a volunteer, but was told that it wasn’t possible. But then, she was given another offer from an administrator.

She said she had a job opening for a hospitality aide and would that be something I was interested in. I said yes. There really wasn’t an option.

Janie already has a busy schedule, working two jobs as an office manager at a financial services firm and an events coordinator for a local nonprofit organization. But now she’s added 15 to 30 hours a week at Windsor Ridge, the assisted-living facility.

She has managed it by working from home for her other two jobs and limiting her exposure to only her home and Windsor Ridge in order to protect herself and the residents.

“I deliver meals and I play games with the residents,” she said. “One of the residents asked me what I do there and I said, ‘I bring dinner and joy.’ Basically anything they ask me to do, I do.”

Seeing her mother is worth it

Janie has been able to see her mother on a regular basis but it hasn’t been easy. “To see her energy deplete right before your eyes is heartbreaking,” she said. “I keep telling mom that we just want her to be alive at the end of this thing.”

Because Janie has always visited Windsor Ridge so often, the other residents already knew who she was. And they are grateful for her presence too.

“She’s got such a bubbly personality, and that’s very comforting to other residents, to see her and be around her,” Melissa Prenatt, Windsor Ridge’s administrator-in-training, told Good Morning America.

It’s made a world of difference to have Janie here.

Janie has been “doing a lot of one-on-one games with the residents that are keeping them active.” But most importantly, she has been an emotional comfort to them.

If she’s delivering a tray or something for dinner and she sees one is kind of down, she’ll go back after dinner and ask if they want to take a walk.

To her, it’s an honor to be able to help

Yes, seeing her mother is a definite perk of her new job but Janie also feels incredibly thankful to be a part of the effort against the pandemic.

The staff there are working so hard. I’m just amazed by the amount of love and care and concern and how many hours they’re working to keep everybody alive.

Her incredible efforts remind us of the importance to find ways to stay connected with each other–now more than ever. The more vulnerable people need us more than ever. 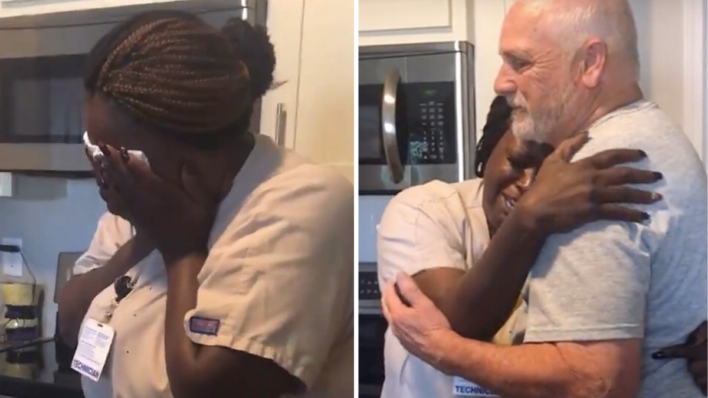 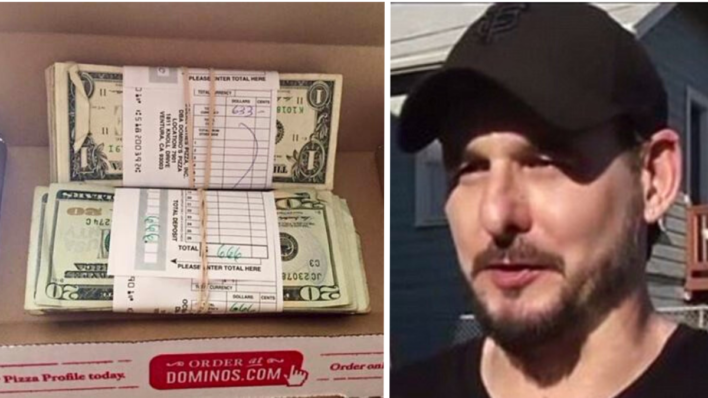