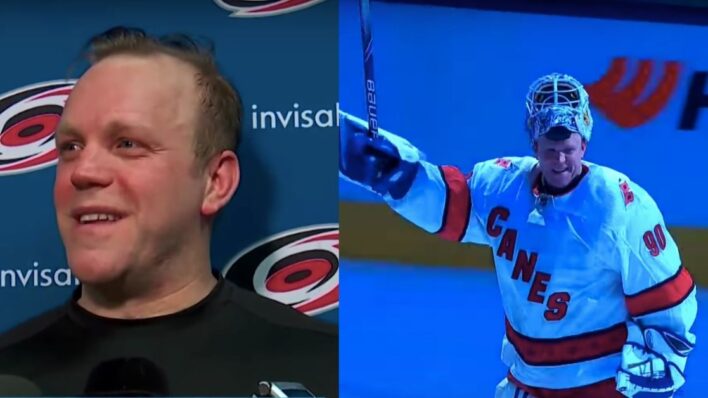 Sports is all about rising to the occasion and being your best both for yourself, for your team, for the supporters and for the game. For this mere Zamboni driver, it meant getting the win for the Carolina Hurricanes hockey team when he had no idea that he would be playing.

He became the most unlikely hero of recent NHL history.

The team had no one else to turn to

On Saturday, the 22nd of February 2020, the two goalkeepers of the Carolina Hurricanes had to step away from the game against the Toronto Maple Leafs due to injuries, leaving the team with no one to guard the net.

That’s when 42-year old Dave Ayres stepped in for the Carolina Hurricanes. In order for the game to go on, the Dave had to play against the Toronto Maple Leafs, which was the home team.

The winds shifted as soon as he stepped in

Dave did not only help by mere act of presence–he completely changed the outcome and direction of the game. The 42-year-old helped the Hurricanes in their 6-3 win by blocking eight of the 10 shots on goal against him in the last 30 minutes.

While he had been designated as a backup goalie before, this was the first time he had ever been forced to play.

I was nervous for the whole second period, as you can tell I couldn’t stop a puck if I had to in the second. But I told the boys, ‘When I come out in the third I’ll be ready to go.’

The Carolina players told Dave to just have fun and try not stress out about the goals. Ayres, who is a kidney transplant survivor, not only did great but he surpassed every expectation. Jason Muzzatti, Carolina Hurricanes goal-tending coach, told NHL.com, he was impressed with how he stayed calm under all that pressure.

An experience with more than one positive outcome

Even though Dave was playing against the home team, the Toronto Maple Leafs, that is known for its impassioned fans, he was touched by their support throughout his stint on the ice.

These guys, how great they were to me, how fun. The crowd in Toronto is unreal, even though I was on the other team they were so receptive and so awesome. Every time I made a save I could hear them cheering for me.

He really made it count

Furthermore, because he has helped the Hurricanes towards a win, Dave will be getting royalties but not everything will be going in his pockets. As the team said, “we are also working with him to identify a kidney foundation that will receive a portion of the proceeds.”

“It was great to see. I heard his background, someone who has received a kidney transplant,” Muzzatti said. “That’s phenomenal. Just a happy, good-natured goalie like most of us are.”