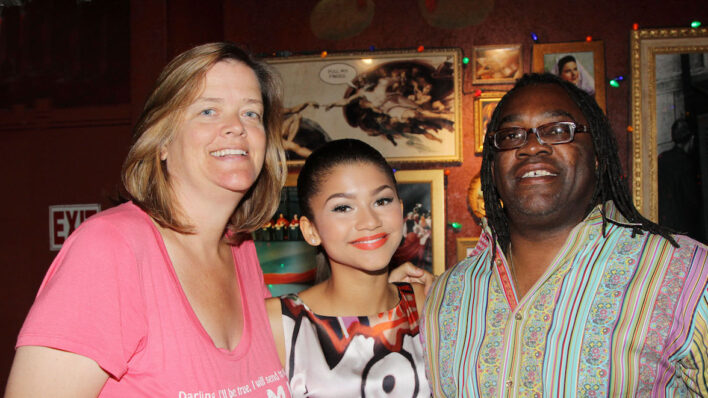 Zendaya credits her parents for the person she is today. So when Twitter trolls attacked them, she was quick to defend them.
By Shaoni Das    January 5, 2021

Zendaya credits her parents for the person she is today. So when Twitter trolls attacked them, she was quick to defend them.

Over the past year, Zendaya has solidified her status as one of Hollywood’s most adored beauty and style icons. From her charming social media presence to her terrific red carpet looks to her stunning, impactful performances in Euphoria and the Spider-Man franchise, she’s captured everyone’s attention for good.

However, with publicity comes scrutiny. Zendaya has only recently found herself at the top of the success ladder, but questions are already being raised regarding her background and upbringing. In the case of Zendaya, a lot of inquiries were directed to her parents. Who were they? How much influence did they have in her career?

Is she close to them? Or, like many former child stars, does she hold resentment towards her folks for the way she was thrust into the spotlight from a young age? Thankfully, the latter did not occur with Zendaya. The former Disney star has always been grateful for her parents’ support, and she will jump to their defence if anyone dares to insult them.

In order to truly appreciate Zendaya’s charisma, kindness, and elegance, it’s essential to look back at her upbringing, and notably, her parents who paved the way. There’s a reason why Zendaya’s willing to risk her reputation to ensure nobody belittles or disrespects them.

Zendaya is “appreciative” of her teacher parents for keeping her grounded

Zendaya was born to Claire Stoermer and Kazembe Ajamu Coleman in Oakland, California. Her name is derived from the Shona language and means “to give thanks.” Both her parents were teachers.

Her mom taught at a number of inner-city schools in the area, including a Shakespeare Academy in Oakland; this is where Zendaya’s first fascination with the arts emerged. Being by her mom’s side as Claire taught her students kindled something fierce within Zendaya, and she decided that this was something that she wanted to pursue as a career and as a lifelong passion.

[my mom] would introduce them to the arts, guide them through the language of Shakespeare, and show them the wonders of nature outside city life – all things that they wouldn’t have experienced otherwise. Watching her was magical; it instilled within me a true appreciation of and devotion to the importance of education

Thanks to her mom, Zendaya learned about the true significance of education and how vital it was to appreciate nature and one’s surroundings. Claire was so dedicated to teaching that she wouldn’t even move out of Oakland when her daughter got cast in Shake It Out, which filmed in Los Angeles.

It wasn’t just through her teaching that Claire made such a lasting impact on her daughter. Zendaya also shared that Claire rarely wore make-up as a young mother. It wasn’t a deliberate choice for her, but young Zendaya watched first-hand what it felt like not to care so deeply about one’s appearance. The same Zendaya has grown up to be a confident, self-assured woman who’s as powerful with make-up as she is without.

My beauty icons are the women in my life. My mom didn’t wear makeup; I don’t think she knew that, to me, it was empowering that she didn’t care.

What’s refreshing is that both the women learned to like make-up at the same time. Claire had her “butterfly moment” at 50 when she realized that she could embrace traditionally feminine accessories like make-up and jewelry — a discovery aided by Zendaya herself. Claire even has her own jewelry line now called Kizzmet Jewelry, and of course, Zendaya, being the most supportive daughter, dons it whenever she has the chance. In fact, both mother and daughter are not afraid of expressing themselves and their interests on social media.

My mom makes the sickest jewelry for her line Kizzmet. I rock it all the time! She knows so much about the meaning of the stones and customizes each piece.

Zendaya’s father is also a teacher

Zendaya’s father is also a teacher — his in-depth investigation of his African roots made a mark on Zendaya as well. He was born Samuel Coleman, but upon having reconnected with his African heritage, he reclaimed his name as Kazembe Ajamu. With her mother being of German and Scottish origin and her father of Nigerian ancestry, the Shake It Up actress realized early on what it meant to feel proud of both sides of her heritage. Her parents taught her to feel grateful for her uniqueness. She and her family even took part in a PSA about Immigrant Heritage.

My mother’s proud of where she’s from, and her history, and her past, and same with my dad. I have roots in Africa. Like, I am from Africa as well as from Germany, and I am very proud of that.

Zendaya to Us Magazine

Kazembe in recent years has taken on the role of Zendaya’s manager and adviser. He accompanies her to Hollywood events and even squashes inaccurate dating rumours about her. On one such occasion, it was rumoured that Zendaya and Odell Beckham Jr. were in a relationship. Kazembe reportedly issued a statement, saying, “What relationship? There’s no relationship. We’re just friends. When you see my daughter out on a date without me, it’s a relationship! Haha!”

In a sweet Father’s Day post, Zendaya paid tribute to her father, and said, “Happy Father’s Day to my OG…thank you for your unconditional love, your unwavering strength, your protection, and your wisdom, even when I think I know everything. I’m so thankful to have you as a father.”

Despite her parents’ divorce, Zendaya grew up well supported

Zendaya credits her parents for keeping her humbled through all the ups and downs. She said that it’s parents who’ve thoughtfully prevented her from going in the same direction as some of her less-fortunate former child actor predecessors. In addition to her parents, she also has five older siblings, all of whom played their role in inspiring her and helping her become her best. The siblings are from her father’s other relationship, but this never affected the dynamic between Zendaya and her other siblings.

The actress posts many pictures of her siblings, and the camaraderie between all of them seems as strong as ever. When talking about her role models, Zendaya said that it isn’t just her dad or her mom that keeps her grounded; it’s the entire clan and, in particular, her big sister. A realization like that wasn’t very apparent as a child, but as she has gotten older, Zendaya had to take the time to feel the privilege of having a large family standing by her side.

As I’ve gotten older. I’ve realized my true models are my parents. My mom is like a sheroe. My dad is so strong. I look up to my big sister and realize the influence she’s had on me and making me a better person. Having such a big, grounded family, I realized as you get older how important that is.

Her parents have been divorced for nearly five years, but Zendaya maintains that they still remain close and are committed to being collectively there for their daughter whenever she needs them. Most of the internet had no clue about this little detail, but Zendaya clarified it all in a tweet, saying, “My parents ain’t been together for a long time, y’all didn’t know cause we private + they still homies.”

I’m really lucky to have the parents that I have. They just have always instilled in me these core values that I think I have to carry with me through everything. I give it up to them, I give it up to family.

Zendaya on The Ellen Degeneres Show

She defended her parents from trolls who called them “ugly”

Most celebrities are used to hearing a variety of hateful language directed at them, but it’s indeed rare when the attacks are directed towards not them but their parents. In this case, trolls on the internet made fun of Zendaya’s parents, calling them ugly, and feigning shocking that they could ever produce a gorgeous daughter like Zendaya. Oddly, comments intended to be compliments for Zendaya turned out to be disgusting criticisms of the people who brought her into this world.

But Zendaya wouldn’t have it. After someone called her parents “ugly,” Zendaya posted a lengthy statement in response and detailed why she would never let anyone insult her parents just like that. First, she said that she’s going to “pray” for this troll. She emphasizes that her parents are “two of the most selfless people” in the world.

She added that her parents are lifelong teachers who’ve spent most of their time nurturing children and their dreams, not getting concerned about their looks and appearances.

While you’re so concerned about what my parents look like, please know that these are two of the most selfless people in the world […] They became educators who have dedicated their lives to teaching, cultivating and filling young shallow mind.

Zendaya also defended the profession of teaching as a whole, saying that it’s one of the most underfunded fields in the country. Last but not least, she emphasized with the troll, telling them that they are beautiful too. She explained that such “hateful things stem from internal struggles” firth and foremost, therefore she assumed the troll also needed some compliments their way.

Her response on its own shows that she’s picked up some outstanding qualities from her parents and that she will not hesitate to defend them whenever the situation calls for it.

If you love your parents, don’t be afraid to show it

As children, we believe our parents are perfect. As we slowly develop and mature, we realize that our parents are not only imperfect, but in many cases, they are the furthest thing from perfect. It’s indeed rare to have parents whom you love to your heart’s content, so once you can acknowledge that you love them, never be afraid to show it.

Zendaya has never let go of her parents, and she’s always known in her heart that none of her success would’ve been possible without parents who’ve led the way. Who’ve showed her how to be kind, thoughtful, independent, and self-reliant. Therefore, she would, of course, come to her parents’ defense when they were attacked for their appearance; it wasn’t even a choice for her. Zendaya knew that she was being complimented and that she would likely lose fans, but retaining their honor was paramount to her.

We may all show our love differently, but if we know in our hearts that we love our parents and that we are appreciative of them, then we shouldn’t hesitate to express it to the best of our abilities. Family dynamics differ from family to family, generation to generation, culture to culture, from person to person even. Still, the love for family is a universal feeling that even the coldest of us wouldn’t dare let go.