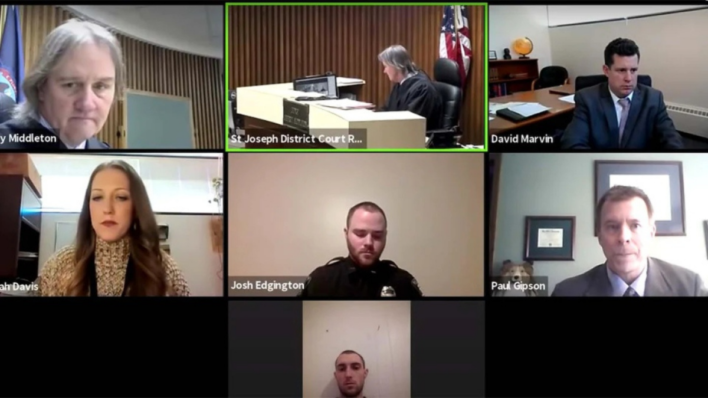 Zoom and other online video calls have become part of our everyday life since the start of the pandemic — but
By Joel Balsam    March 24, 2021

Zoom and other online video calls have become part of our everyday life since the start of the pandemic — but a case in Michigan proved how the service can be abused when a suspect lied about being in the same home as the victim. Thankfully, a quick-thinking prosecutor noticed and saved the day.

A shocking Michigan court case over Zoom was shared online and viewed more than 900,000 times before being taken down, CTV News reports.

The case involved Coby James Harris, a 21-year-old in Sturgis, Michigan who was being charged with assault with intent to commit bodily harm.

As the case was happening, prosecutor Deborah Davis noticed something was wrong — the complainant kept looking away from the camera while answering questions.

That was enough for Davis to flag the judge that the suspect was potentially intimidating the complainant.

“Your honour, I have reason to believe that the defendant is in the same apartment as the complaining witness right now and I’m extremely scared for her safety,” Davis said in the video shared by CTV News. “And the fact that she’s looking off to the side and he’s moving around, I want some confirmation that she is safe.”

Harris and the complainant claimed that they were at their respective homes, but when the judge in the case, Jeffrey Middleton, asked them to show their house number outside on camera, the suspect started making excuses.

“I don’t even think this phone has the charge for that. I’m at like 2% right now. I’m hooked up to the wall charger right here,” said Harris.

Police showed up to Harris’ house, only to find both the suspect and the victim inside.

“I’m sorry I lied to you. I knew the cops were outside,” Harris told the judge, while being handcuffed by police.

“(Mr) Harris, my advice is don’t say anything else,” the judge interrupted. “The hearing is adjourned. Your bond is cancelled. If you have $10 million, you can’t bond out. In addition, the prosecutor’s probably also going to charge you with obstruction of justice.”

Clearly upset about what happened, the judge said the nature of the Zoom call made this possible.

“This is an issue we didn’t have when we had live court. This is the first time to my knowledge, if he is in the same venue, that this has occurred,” Middleton told the courtroom. “That’s the first time I ever had anybody sitting in the next room, potentially intimidating a witness.”

So technology aside, the important takeaway here is how incredible it was that the prosecutor was able to notice the slight hint which showed her the complainant might be in trouble. Her quick-thinking was straight-up heroic, and should hopefully send a signal to other Zoom court cases to keep an eye out for this shady behavior.