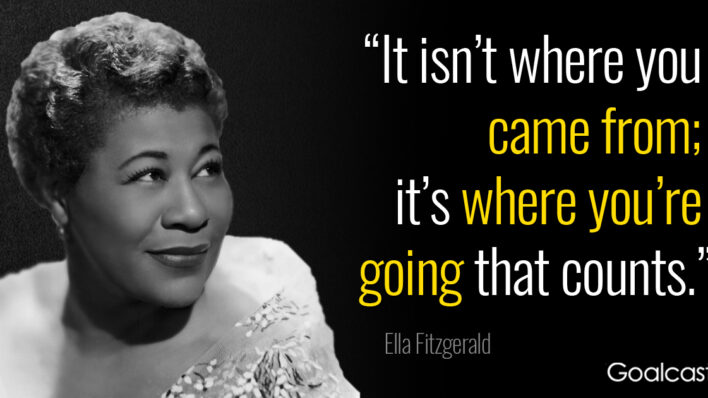 12 Inspiring Ella Fitzgerald Quotes to Lighten Up your Day

Known as “the First Lady of Song,” Ella Fitzgerald was a famous jazz singer and the first African-American woman to
By Flavia Medrut    April 25, 2018

Known as “the First Lady of Song,” Ella Fitzgerald was a famous jazz singer and the first African-American woman to

Known as “the First Lady of Song,” Ella Fitzgerald was a famous jazz singer and the first African-American woman to win a Grammy Award.

After a troubled childhood anchored in many financial problems, Ella entered her name for a dance contest. That’s right! Her first dream was to become a dancer. But at the time, the odds were not in Ella’s favor. When she noticed another group of performers, she knew she couldn’t really compete with them, so she decided to sing instead. And it was a life-changing decision. The crowd was amazed; she won the first prize and soon became a singer in Chick Webb’s band.

From that moment on, Ella Fitzgerald was a constant success. Her beautiful voice won her no less than 13 Grammys and sold her more than 40 million albums.

A strong-willed woman who came from nothing, Ella Fitzgerald was and remains a jazz legend. Here are 12 beautiful Ella Fitzgerald quotes on love and all the things that really count in life. Just don’t give up trying to do what you really want to do. Where there is love and inspiration, I don’t think you can go wrong. It isn’t where you came from; it’s where you’re going that counts.

I have been rich, and I have been poor. Believe me baby, rich is better!

Noticing the days hurrying by; When you’re in love, my how they fly!

I never was cut out to step and strut out. Give me the simple life.

A house that rings with joy and laughter, and the ones you love inside.

Music is the universal language… it brings people closer together.

What everyone wants more than anything else is to be loved.

I stole everything I ever heard, but mostly I stole from the horns.

Everybody wants to know about my style and how it came about. It’s no big secret. It’s the way I feel.

I used to be very self-conscious. I used to wish I was pretty. By smiling, I think I’ve made more friends than if I was the other way.

They refuse to look for new ideas and new outlets, so they fall by the wayside… I’m going to try to find out the new ideas before the others do.