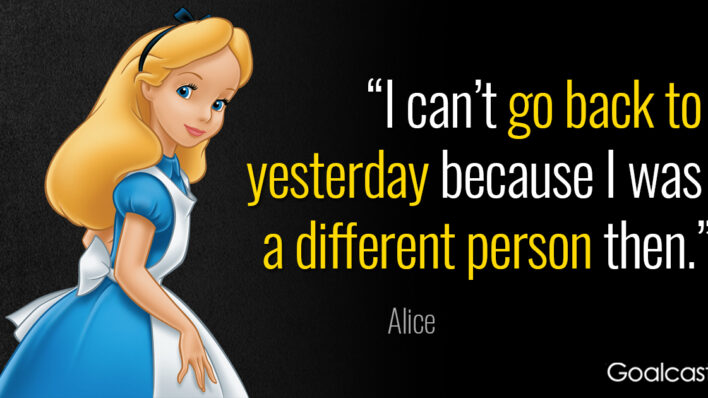 The Best Alice in Wonderland Quotes From All of Your Favourite Characters Including Alice, the Mad Hatter, the White Rabbit and the Red Queen

Quotes on imagination and life from Lewis Carroll’s, Alice in Wonderland. This list includes quotes from the Chesire Cat, Mad Hatter, the Red Queen and Alice.
By Flavia Medrut    March 21, 2018

Quotes on imagination and life from Lewis Carroll’s, Alice in Wonderland. This list includes quotes from the Chesire Cat, Mad Hatter, the Red Queen and Alice.

Written in 1865 by Lewis Carroll, Alice in Wonderland (short for Alice’s Adventures in Wonderland) is one of the most popular children’s stories, and will belong to many generations to come. (Read more inspiring quotes by popular movie heroes.)

Alice, the main character, is based on a real girl named Alice Liddell, who was one of Carroll’s child-friends. The story is about a girl falling through a rabbit hole and arriving into a fantasy world where she makes friends with some peculiar creatures.

The seven-year-old girl has a lot of imagination and is described as being a bit of a show-off when it comes to her knowledge, and maybe a bit too direct, as she sometimes makes blunt remarks that upset others around her. But some would say Alice is actually very polite and hates the rudeness of others. You mean you can’t take less. It’s very easy to take more than nothing.

You know what the issue is with this world? Everyone wants some magical solution to their problem and everyone refuses to believe in magic.

Yes, yes, but you would have to be half-mad to dream me up.

[Referring to the White Knight] “OK, he’s as mad as a box of frogs. This is impossible – Alice

Only if you believe it . – The Mad Hatter

There is a place, like no place on earth. A land full of wonder, mystery, and danger. Some say, to survive it, you need to be as mad as a hatter. Which, luckily, I am.

When you can’t look on the bright side, I will sit with you in the dark.

Egad, you learn something new every day. Make a note of that, Marchy, it might come in useful.

If you knew Time as well as I do, you wouldn’t talk about wasting it.

No wonder you’re late. Why this watch is exactly two days slow.

Alice Through The Looking Glass Quotes

Alice Through The Looking Glass’ is a spectacular story that speaks of an adventure that teaches philosophy even in the humor. There’s so much that can inspire us if we go through the book. Here are some of the most amazing Alice through the looking glass quotes you will find in this book.

Speak in French when you can’t think of the English for a thing–
turn your toes out when you walk—
And remember who you are!

Now, here, you see, it takes all the running you can do, to keep in the same place. If you want to get somewhere else, you must run at least twice as fast as that! II can’t go back to yesterday, because I was a different person then.

I give myself very good advice, but I very seldom follow it.

If I had a world of my own, everything would be nonsense.

The hurrier I go, the behinder I get.

The Duchess! The Duchess! Oh my dear paws! Oh my fur and whiskers! She’ll get me executed, as sure as ferrets are ferrets!

Alice: How long is forever?

Begin at the beginning and go on till you come to the end. Then stop.

Absolem, the caterpillar in ‘Alice in Wonderland’ is probably the wisest of all. Even then, He is a quite mean character providing little to no assistance to Alice and ends up confusing her more while she is trapped in Wonderland. Alice’s adventures in wonderland quotes make up a curious read because of Absolem’s ambiguous personality. Here are some interesting Alice in Wonderland caterpillar quotes.

I am exactically three inches high, and it is a very good height indeed!

The Mushroom, Of Course!!

You’ll get used to it in time.

Who are you?” said the Caterpillar.

This was not an encouraging opening for a conversation. Alice replied, rather shyly, “I—I hardly know, Sir, just at present—at least I know who I was when I got up this morning, but I think I must have been changed several times since then.”

“What do you mean by that?” said the Caterpillar, sternly. “Explain yourself!”

“I can’t explain myself, I’m afraid, Sir,” said Alice, “because I am not myself, you see.

The Cheshire Cat has a permanent smile on his face and can disappear at will. The cat is a very odd being able to reshape his body to either amuse or frighten his visitors. He’s very mysterious, and in his own way, very dark. He is more or less interpreted as a guiding spirit for Alice. This is why Alice in Wonderland Cheshire cat quotes can be motivational. Here are some beautiful Cheshire cat quotes.

Only the insane equate pain with success.

How fine you look when dressed in rage. Your enemies are fortunate your condition is not permanent. You’re lucky, too. Red eyes suit so few.

Only a few find the way, some don’t recognize it when they do – some… don’t ever want to.

Every adventure requires a first step. Imagination is the only weapon in the war with reality.

Well, some go this way, and some go that way. But as for me, myself, personally, I prefer the short-cut.

I am not crazy; my reality is just different from yours.

Down The Rabbit Hole Quotes

It’s a poor sort of memory that only works backwards

– The Queen of Hearts

No wise fish would go anywhere without a porpoise.

Everything’s got a moral, if only you can find it.

I don’t see how he can ever finish if he doesn’t begin.

Begin at the beginning”, the King said gravely, “and go on till you come to the end: then stop.

If everybody minded their own business, the world would go around a great deal faster than it does.