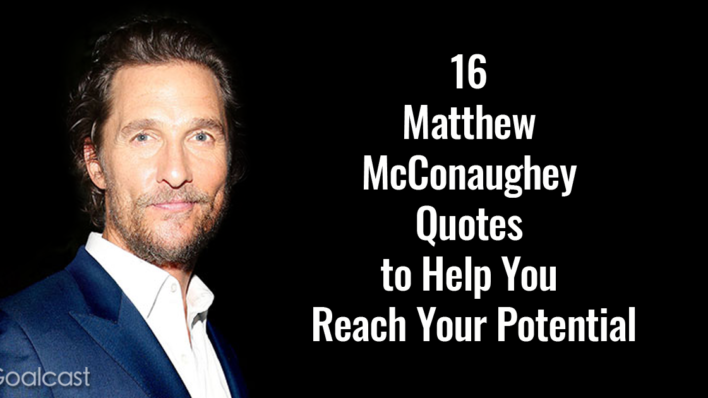 16 Matthew McConaughey Quotes to Help You Reach Your Potential

Matthew McConaughey is an American actor, producer and director. He’s mostly everything he wants to be, but you probably already
By Flavia Medrut    November 23, 2018

Matthew McConaughey is an American actor, producer and director. He’s mostly everything he wants to be, but you probably already know that.

McConaughey first gained attention back in 1993 with his role in Dazed and Confused. Ever since then, he had a way of capturing the eye onscreen and impressed everyone by managing to pull off any character, no matter how complex or different.

Winning the Academy Award for Best Actor in a leading role (Dallas Buyers Club) proves that McConaughey has moved on from romantic comedies to building a career as a complete artist. He was the scientist-turned-farmer in Interstellar and the owner of a male strip club in Magic Mike (eye-candy for the ladies).Obviously, these are just a few examples.

McConaughey is also the type of actor who shares his success with people in need. He created a YouTube channel and posted a few videos trying to raise funds for different causes. He’s not as active as you’d expect, but whilst other celebrities own such a channel for personal growth, he did it to help others. Here are 16 Matthew McConaughey quotes to help you evolve and reach your potential.

Life is a series of commas, not periods. I believe in living in the present and making each day count. I don’t pay much attention to the past or the future.

Best thing you could probably do as a father is make sure they see how you love their mother.

God has shown me that it’s a scientific fact that gratitude reciprocates.

I don’t want to just revolve. I want to evolve. As a man, as a human, as a father, as a lover.

There’s two sorts of fear: one you embrace and one you should listen to and turn the other way.

Be brave. Take the hill. But first answer the question, ‘What is my hill?’

I don’t mind assholes. It’s the dork I don’t trust. The dork is the one who’s trying to be whatever he thinks you want him to be. I trust the asshole cause you know where he’s gonna stand.

When I say I have gotten a lot more self-ish, I mean I am less concerned with what people think of me. I’m not worried about how I’m perceived. Selfish has always gotten a bad rap

When it comes to gay, straight, or whatever, I’m for anything life-affirmative. Everybody should feel empowered without oppressing anyone who’s different.

Life’s barely long enough to get good at one thing. So be careful what you get good at. There’s a difference in thinking you are a champion and knowing that you are.

We dissect failure a lot more than we dissect success.

Life is not fair, it never was and it is now and it won’t ever be. Do not fall into the trap. The entitlement trap, of feeling like you’re a victim. You are not.