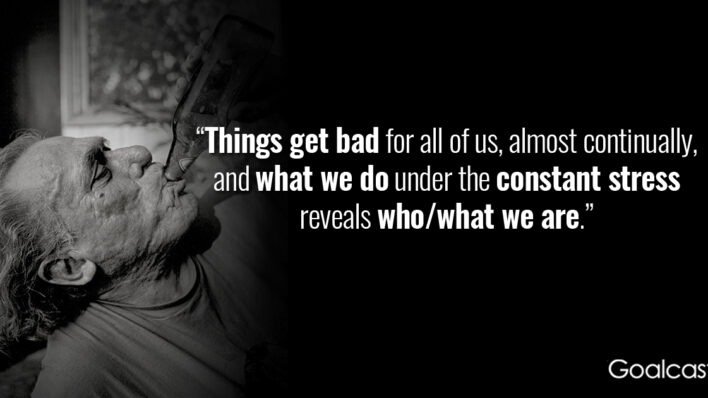 Charles Bukowski was a prolific American-German author and poet, noted for his unsparingly realistic and graphic writings depicting the social
By Flavia Medrut    July 11, 2018

Charles Bukowski was a prolific American-German author and poet, noted for his unsparingly realistic and graphic writings depicting the social and cultural ambiance he lived in.

Bukowski grew up as a socially withdrawn adolescent. Living in a family with an abusive father that used to beat him with a razor strap three times a week turned him into a shy and enraged young man. Nonetheless, Bukowski said the undeserved pain and depression served him as inspiration for his writings.

His stories tackle relationships, alcohol, the lives of poor Americans, work and the act of writing. They often revolve around the life of his alter ego Henry Chinaski – an alcoholic writer, womanizing misanthrope who loves classical music.

Bukowski wrote a great number of poems and short stories and six novels. His work was so popular that he became one of the best-known American authors.

Here are 17 Charles Bukowski quotes to help you develop resilience. Some people never go crazy. What truly horrible lives they must lead.

The problem with the world is that the intelligent people are full of doubts, while the stupid ones are full of confidence.

People with no morals often considered themselves more free, but mostly they lacked the ability to feel or love.

What matters most is how well you walk through the fire.

Sometimes you climb out of bed in the morning and you think, I’m not going to make it, but you laugh inside — remembering all the times you’ve felt that way.

If you’re losing your soul and you know it, then you’ve still got a soul left to lose.

What is terrible is not death but the lives people live or don’t live up until their death.

You have to die a few times before you can really live.

You begin saving the world by saving one man at a time; all else is grandiose romanticism or politics.

We’re all going to die, all of us, what a circus! That alone should make us love each other but it doesn’t. We are terrorized and flattened by trivialities, we are eaten up by nothing.

If you’re going to try, go all the way. You will ride life straight to perfect laughter. It’s the only good fight there is.

Find what you love and let it kill you.

We don’t even ask happiness, just a little less pain.

Things get bad for all of us, almost continually, and what we do under the constant stress reveals who/what we are. If you have the ability to love, love yourself first.