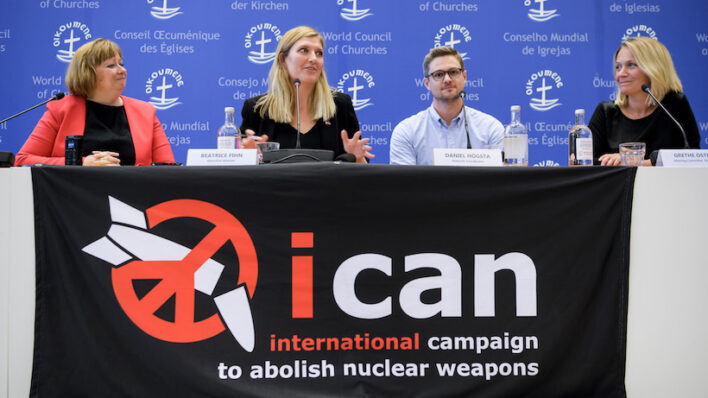 A candlelit march moved slowly through the dark streets of Oslo on Sunday night, with the city’s Christmas lights
By Eliza Theiss    December 11, 2017

A candlelit march moved slowly through the dark streets of Oslo on Sunday night, with the city’s Christmas lights A candlelit march moved slowly through the dark streets of Oslo on Sunday night, with the city’s Christmas lights and that of candles and phones illuminating the faces of participants.

The procession was one of celebration, with the International Campaign to Abolish Nuclear Weapons (ICAN) receiving the 2017 Nobel Peace Prize at Oslo City Hall. But the march also served as a reminder of why ICAN’s work remains of the utmost importance in our times of international political uncertainty.

We have given nuclear weapons so much power – but when we stop doing that is when we can get disarmament.

While the Nobel awards ceremony unfolded during a black-tie banquet in Stockholm, the International Campaign to Abolish Nuclear Weapons received the award in the Norwegian capital, as is customary, on the anniversary of Alfred Nobel’s death.

Launched in 2007, the international civil society that makes up ICAN has been working tirelessly to draw attention to the threat of utter destruction posed by the continued existence of nuclear weapons.

Today, it’s our great honour to accept the #NobelPeacePrize. WATCH coverage @ 13.00 CET on https://t.co/wFGTVMTKxq. This award is for all campaigners across 🌏 There’s still work to be done. RT & help us write final chapter in story of nuclear weapons. #EndofNukes #nuclearban pic.twitter.com/9M9j890Wby

The organization has been instrumental in the promotion and passing of the United Nations’ Treaty on the Prohibition of Nuclear Weapons, the first legally binding international agreement targeting nuclear armament.

The treaty was passed on July 7, 2017 and needs to be ratified by 50 nations before it goes into effect. ICAN has been using the Nobel awards’ platform to continually promote the essential work and garner further support for the remaining governments to ratify the treaty and put international pressure on countries opposing it.

ICAN’s duty is to be that voice. The voice of humanity and humanitarian law; to speak up on behalf of civilians. Giving voice to that humanitarian perspective is how we will create the end of fear, the end of denial. And ultimately, the end of nuclear weapons.

ICAN was named the winner of the 2017 Nobel Peace Prize “for its work to draw attention to the catastrophic humanitarian consequences of any use of nuclear weapons and for its ground-breaking efforts to achieve a treaty-based prohibition of such weapons,” per the 21017 Nobel Committee. ICAN Director Beatrice Fihn – although not a laureate herself – accepted the prize on behalf of the group.

The Nobel prize week ended Sunday evening at the official awards ceremony in Stockholm, with this year’s laureates honored by guests that included the Swedish royal family.

Honoring the best and the greatest in fields of medicine, physics, chemistry, economics and literature, the essence of the Nobels and their relevance in our current culture was eminently summarized by 2017 Nobel Prize in Literature laureate Kazuo Ishiguro:

We live today in a time of growing tribal enmities. Of communities fracturing into bitterly opposed groups. (…) the Nobel Prize is an idea that in times like these helps us to think beyond our dividing walls, that reminds us of what we must struggle for together as human beings. – Kazuo Isiguro