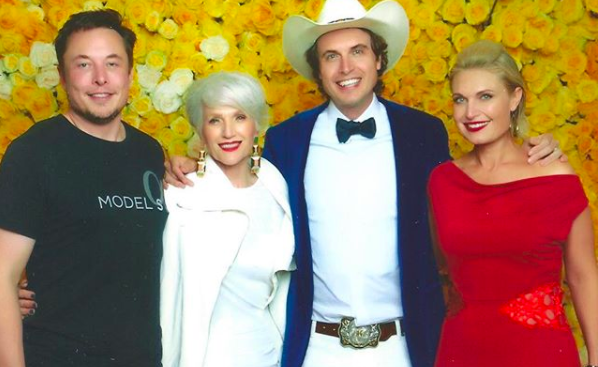 Elon Musk is considered a modern-day genius making leaps and strides towards a solar-powered world filled with electric cars, hyperloops, and
By Jenny Medeiros    May 11, 2018

Elon Musk is considered a modern-day genius making leaps and strides towards a solar-powered world filled with electric cars, hyperloops, and Arguably, his childhood had a lot to do with his hard-working attitude and ferocious appetite for outlandish ventures. In fact, we could say there’s one person we don’t give enough credit to for Elon’s success: his mother, Maye Musk.

Raising one wildly successful entrepreneur is one thing (mostly luck), but raising three is something else entirely. That’s right, Elon isn’t the only prodigy in his eclectic family.

His younger brother, Kimbal Musk, is a food and tech entrepreneur with over 13 restaurants. His younger sister, Tosca, is a producer and director who started her own Netflix-like streaming service for romance films called PassionFlix.

Maye Musk herself is quite the force to be reckoned with. With silver hair and striking blue eyes, she has been a successful model for the past 54 years while also running her own nutrition business for 45 years. She’s 69 years old and says she’s “just getting started.” So, it’s reasonable to say Elon picked up a few lessons from his remarkable mother during his rather unusual childhood. Here are four of those lessons:

1. She taught him independence

Unlike most mothers, Maye Musk was never the overprotective parent who hovered over her children and made sure they did their homework. Elon, along with his younger siblings, became accustomed to being independent from an early age and was left to explore the world on his own, free to develop his own interests.

This hands-off parenting style could very well be the reason Elon felt so comfortable moving to Canada on his own at 17.

At 18, Maye began studying dietetics and by 21 she had her own practice. Due to her children, she ran her business from home while also using them as employees. She taught them about work ethics, organization, and the value of responsibility.

With such a headstrong role model as a mother and a childhood centered on business, it’s no wonder why Elon and his siblings excelled at entrepreneurship as if it were second nature.

Most children have an allowance while growing up. Even if they didn’t, their parents would chip in to help them buy that one toy or that book. Not Maye Musk. She never gave any of her kids money in a harsh bid for them to be resourceful and work for what they wanted.

“They grow up knowing you work hard, and the harder you work, the better you do and the luckier you get.” She told Vanity Fair.

After Elon left for Canada, his mother decided to go to Toronto herself and see if it was wise to move the whole family there. When she returned, Tosca had already sold the family home (she was 15).

While most mothers would have lost their minds at finding their home empty and sold, Maye was unfazed and simply signed the papers. She never reprimanded her children for taking extraordinary decisions.

Even when Elon and Kimbal were blowing up homemade rockets in the backyard, or selling Easter eggs door to door at ridiculously high prices; Maye allowed them to take those risks and face the consequences. This created a sense of intrepidity in them, which explains why Elon is so bold when it comes to making large-scale business decisions.

Maye Musk’s parenting style was certainly unconventional. She gave her children a degree of freedom that would be seen as irresponsible by today’s standards, she allowed them to take risks, and never once tried to shape their interests.

She made sure they were free to develop their own personality and determine their own future. While we can thank Elon Musk for all his astonishing inventions, we should also be thanking his mother for inspiring him to pursue them.