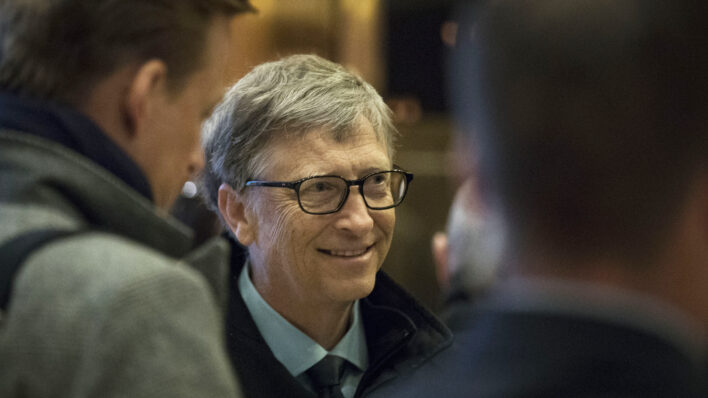 5 Daily Habits to Steal from Bill Gates, Including a Surprisingly Humble Way of Measuring Success

As a digital nomad and journalist, I travel the world while logging around 70 articles a month. To effectively manage a
By Lindsay Tigar    February 5, 2019

To say you fundamentally shifted how the work digests online content is a major statement. And one that powerhouse and legend Bill Gates can say proudly.

He founded the Microsoft Corporation, which ultimately became the world’s largest PC software company. Over the decades, he served as chairman, CEO and chief software architect until the summer of 2006, when he transitioned to a part-time work at Microsoft and a full-time role at the Bill & Melinda Gates Foundation.

Today, he still works as a ‘chief software architect’ — a position he created for himself! — and as a chairman, while dedicating much of his time building his charitable contributions. His success has brought him much financial gain, cementing his spot on Forbes list of the world’s wealthiest people since 1987. In fact, he from 1995 until 2017, he was the richest person on the planet, with an astounding net worth of $89.9 billion, until he was surpassed by Amazon founder and CEO, Jeff Bezos. Every game-changer has different rituals and rules they swear by, and for Gates, these are the most essential.

For those who genuinely love what they do, expanding their skill set isn’t work — but fun! Considering his level of passion, it probably comes as no surprise that Gates is a lifelong learner, dating back to his college days.

In a Reddit Q&A, he shared his method to madness: not attending classes he was signed up for and instead, attending classes he wasn’t signed up for. “This worked out in a funny way when the final exam for a Combinatorics class (which I signed up for) was given at the same table as my Brain studies class (which I attended and did not sign up for). My friends from Brain studies thought it was very strange that I sat on the wrong side of the table and took the Combinatorics exam even when I was the most vocal student in the Brain class.”

This apparently worked out in his favor — giving him a double education and of course, a thirst for knowledge. Every year, he releases his favorite books, as well as his goals. For 2019, he’s committed to learn and think more about the balance between privacy and security, as well as the use of technology within education.

He gives credit where credit is due.

While some leaders bask in the limelight and are more than happy to take all of the credit — Gates doesn’t prescribe to this mindset. Instead, he shares the fame and the fortune with those who have made the company fruitful — specifically, co-founder Paul Allen.

What you might not realize is Allen and Gates go way back… all the way to the seventh grade. “Paul foresaw that computers would change the world. Even in high school, before any of us knew what a personal computer was, he was predicting that computer chips would get super-powerful and would eventually give rise to a whole new industry. That insight of his was the cornerstone of everything we did together,” he shared in a blog post.

And beyond his lengthy friendship with Allen, he also speaks highly of other hires, explaining he prioritizes confidence in hiring. “Having someone who you totally trust, who’s totally committed, who shares your vision and has a little bit different set of skills and also acts as a check on you… The benefit of sparking off someone who’s got that kind of brilliance has not only made it fun but it’s really led to a lot of the success,” he shared.

Beyond business? He also believes in being mindful of the company you keep, talking with Warren Buffet at Columbia University about friendship: “…some friends challenge you about things you’re doing and that level of intimacy is great. It’s really through Melinda and seeing other people I realized, okay, it’s really worth the investment to have those people, as you’re always there to help them and vice versa.”

He invests his time in the future.

Like many of the world’s billionaires, Gates has openly stated he will donate half of his fortune to charity. His renowned foundation has also made strides across multiple causes, including human trafficking and research into terminal illnesses. He believes it is partly his responsibility to contribute not only to the greater good of today—but of future generations.  “I want to focus on things where I think my experience working with innovation gives me an opportunity to do something unique,” he told Rolling Stone.

And while speaking with The Wall Street Journal, he explained how important it is for him to make long-lasting strides. “When I made the transition from my first career at Microsoft to my second career in philanthropy, I didn’t think that my success rate would change much. I was now putting money into new ways to reduce poverty and disease. Discovering a new vaccine, I figured, would be just as hard as discovering the next tech unicorn. Vaccines are much harder, it turns out.”

If you want to take major risks, you have to accept major faceplants. Gates shared he assumes only 10 percent of technology investments will succeed (and succed wildly), while the other 90 percent are expected to fail. This faith in his ideas—and team—has made him willing to make bigger bets, most of which, have paid off. “Well, I think I was very lucky that when I was in high school the computer was brought in there and I developed a fascination for it and became kind of fanatical about it so that I didn’t view it as risky, I viewed it as this kind of hobby. But I think it’s great to be risk taking, particularly when you’re young, trying out different things, fields that aren’t very popular that you might enjoy,” he shared.

He uses his own measurement to drive success.

Who says what went well—and what didn’t? While plenty of people rely heavily on numbers, Gate has his own unique way of determining success. He shared with Bloomberg: “The quality that has helped me in lots of ways is a measurement, a scientific framework where I go and say ‘did anybody handle this well? What are the very best practices? Do we have number on that? Let’s get everybody measuring what they’re doing so they can strive to match what their best achievement is.’”

He also takes a page from pal Warren Buffett’s handbook and believes the measure of success is whether the people close to you are happy and love you. We say that’s a pretty solid way of looking at your life, don’t ya think?