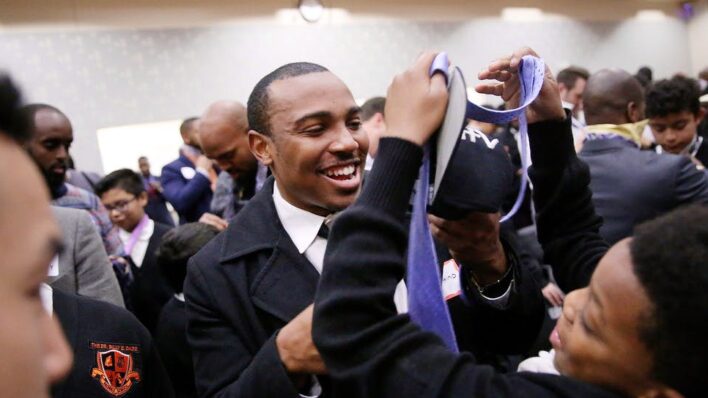 Billy Earl Dade Middle School (Dade MS) teaches around 900 children, many of them from low-income families. In fact, 90% of the Dallas middle school’s student population comes from economically underprivileged families. Unfortunately, many students also come from broken homes, and absentee fathers are an all-too-common occurrence.

So when the school’s Site Based Decision Making Team decided to hold the first-ever “Breakfast With Dads” in December, they soon ran into a heartbreaking problem.

Although around 150 schoolboys signed up for the event, a significant number of the 11- to 13-year-olds were set to participate in a celebratory event without a father, or even an adult male role model – something that would have not only defeated the entire purpose of the event, but would have left many of the children feeling left out and disappointed.

Words cannot describe the impact mentoring youth can have on both you and your mentee. Powerful to see a community of fellow men and fathers come together to wrap their arms around or young men. Thank you for having me out. pic.twitter.com/2fTicFpzws

Worried, the organizers took to social media with a plea for help, looking for about 50 or so men who would be willing to dedicate 1 hour to the young students, giving advice, showing interest – and simply showing up for them. What happened next, amazed everybody from students and organizers, to members of the local and global community, attracting praise from around the world and welcome positive media attention.

The call for help spread like wildfire, and on the morning of the event, it wasn’t 50 men that showed up to support the eager students, but nearly 600!

The overwhelming response forced organizers to change the venue from the school’s gymnasium – a welcome conundrum, that volunteers eagerly pitched in to solve by helping with set-up, registration and all the fine details necessary to make the event a success.

@DISDPD_AChiefJR was one of the mentors who attended #BreakfastWithDads on Dec. 14. Today he met with his new mentee who wants to be a police officer when he grows up! Jason gave him a VIP tour of a new police vehicle and talked about their common interest in drones! pic.twitter.com/E0h8qoJ02V

The volunteers came from all backgrounds, ethnicities and ages, and for many, this was the first time volunteering or mentoring – an experience they found extremely rewarding, seeing the overwhelming joy and excitement on all the young faces.

Volunteers lined up to teach the young teenagers how to tie a proper half-Windsor tie, talk about their future plans and current problems, their hobbies and shared passions, and offer career advice – one aspiring cop even got a guided tour of a new police car.

Thanks to hard-working organizers and the almost 600 mentors that showed up, kids got to enjoy a fantastic morning being the focus of attention, love, community outreach and leadership.