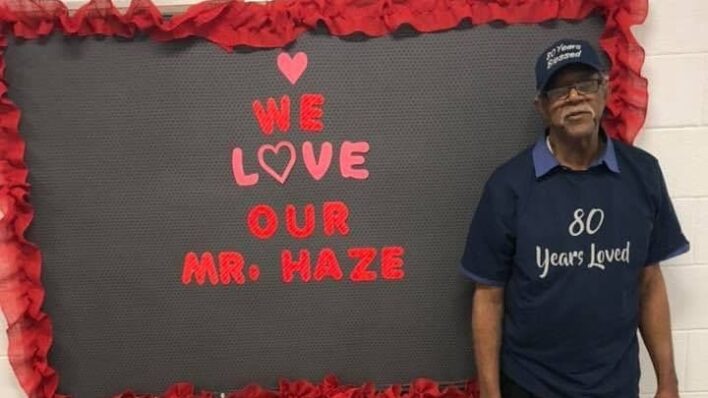 80-Year-Old School Janitor Reports to Work, Only to Discover 750 People Waiting to Sing Him Happy Birthday

Haze Mabry just turned 80 years old, and on his birthday, just like every other day, he reported to Pike
By Aly Walansky    April 5, 2019

Haze Mabry just turned 80 years old, and on his birthday, just like every other day, he reported to Pike

Haze Mabry just turned 80 years old, and on his birthday, just like every other day, he reported to Pike County Elementary in Georgia where he works as a janitor, prepared to clean.

But to his surprise, that day was different than any other day. Just as he was settling in for a day of work, he was greeted by more than 750 people, including, students, teacher, and staff, lining the hallways.

The students had made handmade cards and banners, were blowing noisemakers, and they all sang happy birthday and chanted his name as he walked by.

Mabry makes a point of interacting with the students when he can. “I know the little faces, but I don’t know every name,” Mabry said.  “Some of them make you know them.”

Mabry didn’t have any big plans for his birthday, and says he was happy just to see another one! “I done had so many,” he said. “I’m just glad to be here.”

The unexpected celebration at school showed Mabry how valued he is by students and faculty alike. “He’s the most loved person in this whole building,” said teacher Lori Gilreath, who planned his surprise. “He won’t brag on himself, but it doesn’t matter what he’s doing or where he is, he will always stop what he’s doing to take care of a child if that child is having a bad day.”

“He doesn’t expect a lot,” Gilreath said. “He just wants to work hard and love on people.”

Gilreath spoke about the acts of kindness she had witnessed, with Mabry giving any student who reaches out his full attention while still doing his job with care.

Haze spent the whole following weekend reading through the buckets of handwritten cards he received!

Maybe we can’t all organize something as big as this particular birthday celebration, but it’s a sign: take any opportunity you get to make someone’s day special, and let them know how they are valued! It can make a world of difference.