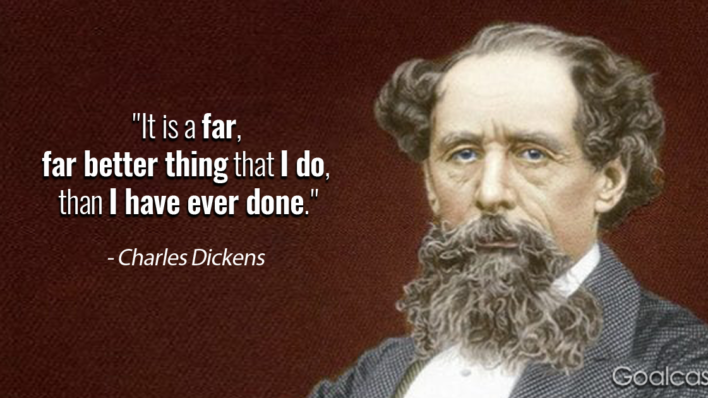 24 A Tale of Two Cities Quotes That Are Simply Incredible

A Tale of Two Cities is a historical fiction novel written by prolific author Charles Dickens. In a departure from his other works, Dickens chose for this story fewer characters and a less complicated plot.

The novel is set in the 18th century (before and during the French Revolution), where France and England were ruled by oppression, fear and torture. The upper class enjoyed all the luxury, while common people died of starvation.

A Tale of Two Cities tells the story of Dr. Alexandre Manette, who was unjustly imprisoned for 18 years in the Bastille in Paris, and then released to live in London with his daughter, Lucie.

This “Dickensian” masterpiece explores themes that are still relevant today -– revenge and its consequences, honor versus dishonor, and the negative effects of a corrupt ruling system.

With over 200 million copies sold, A Tale of Two Cities is one of the best-selling novels of all time. The book is a dense classic and an excellent choice of reading material for senior high school students that has also been adapted for film, radio, and the stage.

Here are 24 A Tale of Two Cities quotes that are simply incredible:

A wonderful fact to reflect upon, that every human creature is constituted to be that profound secret and mystery to every other.

I wish you to know that you have been the last dream of my soul.

I see a beautiful city and a brilliant people rising from this abyss. I see the lives for which I lay down my life, peaceful, useful, prosperous and happy.

Detestation of the high is the involuntary homage of the low.

Nothing that we do, is done in vain. I believe, with all my soul, that we shall see triumph.

There is prodigious strength in sorrow and despair.

Crush humanity out of shape once more, under similar hammers, and it will twist itself into the same tortured forms. Sow the same seeds of rapacious licence and oppression over again, and it will surely yield the same fruit according to its kind.

He knew enough of the world to know that there is nothing in it better than the faithful service of the heart.

Tell the Wind and the Fire where to stop; not me.

Remember how strong we are in our happiness, and how weak he is in is misery!

Death may beget life, but oppression can beget nothing other than itself.

Into his handsome face, the bitter waters of captivity had worn; but, he covered up their tracks with a determination so strong, that he held the mastery of them even in his sleep.

But we common dogs are proud too, sometimes. They plunder us, outrage us, beat us, kill us; but we have a little pride left, sometimes

We’ll start to forget a place once we left it.

Vengeance and retribution require a long time; it is the rule.

Is it possible! Yes. And a beautiful world we live in, when it IS possible, and when many other such things are possible, and not only possible, but done

I am sure that he is capable of good things, gentle things, even magnanimous things.

That glorious vision of doing good is so often the sanguine mirage of so many good minds.

Not knowing how he lost himself, or how he recovered himself, he may never feel certain of not losing himself again.

I have had the weakness, and have still the weakness, to wish you to know with what a sudden mastery you kindled me, heap of ashes that I am, into fire.