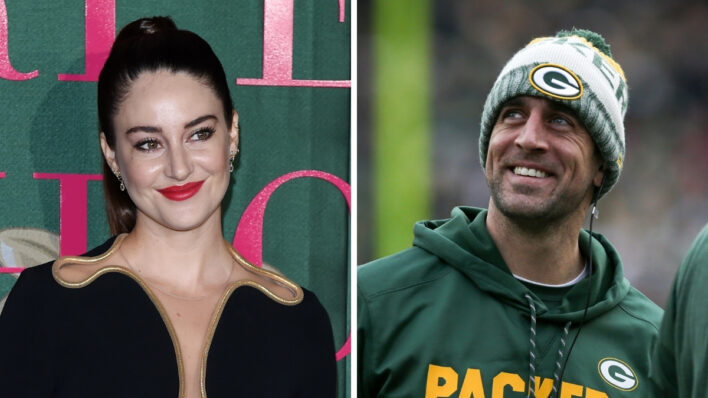 Aaron Rodgers and Shailene Woodley’s engagement took the world by surprise but their romance yields many lessons about love.
By Barbara Pavone    April 6, 2021

Aaron Rodgers and Shailene Woodley’s engagement took the world by surprise but their romance yields many lessons about love.

It was early 2020 and lockdowns were taking effect around the country when the usually private Shailene Woodley revealed she was self-isolating on her own. Speaking with Bustle in April 2020, the Divergent actress shared that she and boyfriend Ben Volavola (whom she was first spotted getting cozy with in October 2017) had broken up because she “realized I was still at an age where I wasn’t able to fully commit.” Noting that she and the Fijian rugby player were “very much on the road to marriage and children,” Woodley stressed the importance of being true to yourself. “I couldn’t be available to him in the way that I wanted to be,” she explained. “I didn’t fully love myself.”

In an interview with The New York Times that same month, the Big Little Lies star also pondered monogamy, noting, “We’re societally conditioned to assume that one person can be our end-all, be-all. This is a concept I’ve been thinking about often right now, because I’m very much single and I’ve chosen to be single for a while,” she told the outlet. “The idea of being with someone… is it only because you’ve fallen in love with that person, or because there’s a newness to understanding yourself because of what that person can offer you?” she asked. But all of those doubts went away when she met Aaron Rodgers and less than a year later, she was telling the world she was engaged!

Here’s everything we know about Aaron Rodgers and Shailene Woodley’s whirlwind romance — and why it works:

Rumors that Aaron Rodgers and Shailene Woodley were dating first started swirling in February 2021. It was February 3 when a source told Us Weekly that the pair “started off as friends, but things have turned romantic.” The insider added that “the relationship is long-distance for right now, but they are making it work.”

Turns out, the couple was doing much more than just dating. On February 6, Rodgers took fans by surprise when he announced that he and Woodley were engaged. While accepting his third MVP award at the 2021 NFL Honors, the Green Bay Packers quarterback teased that “2020 was definitely a crazy year filled with lots of change and growth, some amazing memorable moments. 180 straight days of having my nose hair scraped, playing for very little fans or no stands the entire season,” he reminisced, then let drop another reason why the year was so different: “I got engaged!”

The football great went on to thank “my team” and “my fiancée” and while many were shocked by the rapid romance, a source told PEOPLE that he and Woodley “are very happy together [so] it’s not surprising he proposed so fast. When you know, you know, right?” Right! Meanwhile, another insider told PEOPLE that while it’s been a “total whirlwind romance,” it works because “they’re very content and peaceful.”

Shailene Woodley was drawn to Aaron Rodgers’ nerdy side

It’s important to share common interests with your partner, but as Shailene Woodley proves, being eager to learn about their passions is sometimes enough. As the actress confessed on The Tonight Show in February 2021, she didn’t know much about football before Aaron Rodgers. “Before I met him, I’d never seen one football game,” she told Jimmy Fallon, adding, “I still have never been to a football game because we met during this wacky, wacky time and all the stadiums were closed that he was playing in.”

What’s more, Woodley shared that she was drawn to a completely different side of Rodgers, one that many of his fans may not know about. “When we met, I knew he was a football guy, but I didn’t know, like, what kind of a football guy he was. And I’m still constantly learning,” she laughed, adding, “I don’t know him as the football guy. I know him as the nerd who wants to host Jeopardy! That’s the dude I know! He just happens to be very good at sports,” she quipped.

And while Woodley didn’t confirm how she and her fiance first got together, she did reveal that they’ve been engaged for some time. “For us, it’s not new news, you know, so it’s kind of funny everybody right now is freaking out over it and we’re like, ‘Yeah, we’ve been engaged for a while,” she told Fallon. Gushing over her beau, she called Rodgers “a wonderful, incredible human being” before joking, “I never thought I’d be engaged to someone who throws balls for a living.”

Getting engaged changed everything for Aaron Rodgers

Although no one knew they were dating at the time, the NFL MVP seemed to hint at the fact that he had met someone special during a September 2020 appearance on the Pat McAfee Show. Opening up about having a “new and increased love of life,” the football great said, “I’ve made decisions and changes and habits that put me in a lot better headspace and there’s just a lot of things that have come together in my life over the last few months that have really been enjoyable. That’s why I’m having so much fun and it starts with love,” he teased, adding, “And then surrounding yourself with people that you really enjoy.”

It sure sounds like that love was coming from Woodley and once the pair’s relationship was public, Rodgers had no qualms about openly praising the power of their connection. During an Instagram Q&A with Zenith Watches in March 2021, the quarterback called his engagement “the best thing that’s happened to me in the last year,” saying he’s “been enjoying that part of my life” and sharing that “the next great challenge will be being a father.” Noting that he’s “in the age group where a lot of my close friends from high school and college are fathers now and have families of their own,” Rodgers admitted that fatherhood may not be “in the immediate future,” but that it’s “definitely something that I really look forward to. It’s going to be a really fun challenge,” he enthused, adding, “I’ve done a pretty good job of taking care of myself the last 37 years and look forward to taking care of another life […] I’ve dreamt about what that will be like and I’m really excited about that chapter, whenever that comes.”

Don’t let a special connection pass you by

While it’s important to take time for yourself to focus on self-love and self-discovery wholeheartedly (as Shailene Woodley did following her split from Ben Volavola), it’s also important to recognize a special connection when it happens. Woodley met Aaron Rodgers just as she was enjoying her newly single life and working through her doubts about monogamy — plus, the pandemic undoubtedly made things all the more complicated — so it would have been easy for her to simply let him go. But it’s not every day that “a wonderful, incredible human being” comes into your life and so, upon recognizing the power (and uniqueness) of their connection, she threw caution to the wind and followed her heart. Every relationship requires some risk-taking and, as Shailene Woodley shows us, if you’re willing to take the leap, the payoff can be truly blissful.