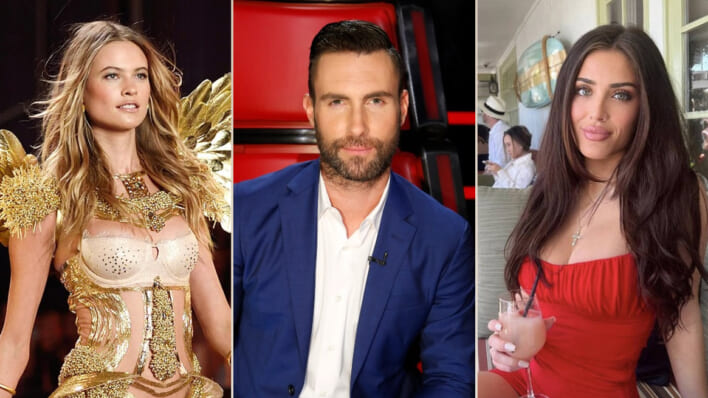 Maroon 5 frontman Adam Levine has made headlines this week for his “sexting” affairs with multiple women. His wife, and Victoria’s Secret model, Behati Prinsloo is currently expecting their third child. In a turn of events, this serious display of misconduct and disrespect toward his family has become a series of memes online. But these memes aren’t funny, they’re just insensitive.
By Bianca Mercuri    September 23, 2022

Maroon 5 frontman Adam Levine has made headlines this week for his “sexting” affairs with multiple women. His wife, and Victoria’s Secret model, Behati Prinsloo is currently expecting their third child. In a turn of events, this serious display of misconduct and disrespect toward his family has become a series of memes online. But these memes aren’t funny, they’re just insensitive.

Our private messages should be just that – private. That is unless they’re exposing a disturbing truth. In the case of Adam Levine’s sexting or cheating scandal, his private messages and history of DMing women continue to unfold before our eyes. The main reason that Levine is taking heat for these messages is that he’s married to Victoria’s Secret model Behati Prinsloo whom he shares two children with, and one more on the way.

RELATED: Will Smith and Jada’s Decision To Work Through Her Affair Speaks Volumes About Their Marriage

The situation is distressing as a whole knowing that a publicly married man was having an affair, but what’s weighing heavily on our minds is the response that this drama is getting online. Here’s how these allegations initially came up, Levine’s response as well as what the internet has to say about it.

Sumner Stroh is an influencer and Instagram model. She posted a TikTok recently exposing Adam Levine for a yearlong affair with her behind his wife’s back. Stroh claims that at the time the affair started she was “young and naïve”. She also says that she felt exploited by him. She said that Levine told her that he was in the midst of separating from his wife and when she figured out this was not the truth, she broke things off.

After months of not speaking, Stroh shows the message from Levine that broke her silence. It read, “Ok serious question. I’m having another baby and if it’s w boy I really wanna name it Sumner. You ok with that? DEAD serious.” This situation is definitely one for the books. Hollywood is no stranger to celebrity cheating scandals, but this new twist of asking his mistress if he can name his son after her seems to be pushing the envelope. Prinsloo might be a patient and forgiving woman, but it would take a saint to name your child after the woman your husband was cheating with.

When questioned about her intentions of sharing her experience with Levine, Stroh says that she had no choice as a friend she thought she could trust tried to sell her story to a tabloid. Obviously, the proof is in the pudding and Stroh had her receipts in order. Other than Stroh, other women have now been coming out in the media also claiming to have evidence of sexting with Levine.

The Maroon 5 singer addressed these allegations in an Instagram Story earlier this week saying, “I used poor judgment in speaking with anyone other than my wife in ANY kind of flirtatious manner. I did not have an affair; nevertheless, I crossed the line during a regrettable period in my life.” He denies ever physically cheating on his wife but did admit that “In certain instances it became inappropriate.” He then finished off his post saying that he has intentions of remedying his actions with his family and that they will get through it “together”.

Everything Wrong With the Adam Levine Cheating Scandal Memes

Most of the memes circulating right now have to do with the content of the messages sent from Levine. Some are criticizing his flirting and poking fun at how someone so famous could have such little game. But, let’s analyze some of these messages that are being laughed at and point out what’s actually wrong with them.

“You are 50 times hotter in person. And so am I hahahah.” This message is striking as it gives us insight into how Levine views himself. It’s not just about the compliment directed at a woman other than his wife. It’s the second part of that message insinuating that he knows he’s hot and has the intention of seeing this woman in person. Levine may deny physically cheating, but this message suggests otherwise.

This message to Stroh is still a frontrunner for the worst flirtatious message ever sent. “It is truly unreal how f*****g hot you are.” It read, “Like it blows my mind.” The other messages coming from other women are some variety of this which is just one of the reasons Levine is getting shamed for his flirting skills. Many are calling it “cringe” and tearing apart the lack of creativity. It seems like the biggest issue in this message is the lack of remorse for saying these things to someone who isn’t Prinsloo – his wife since 2014.

The internet has a bad habit of taking seriously disturbing behaviors and turning them into a punchline. Levine’s messages to these women are not a joke, they are not okay, and they are not funny. We saw a similar response online to the recent Leonardo DiCaprio situation in which it was revealed that all of his girlfriends have been 25 or under at the time of their breakup. Men in power, especially in Hollywood, tend to use their blown-out egos and intimidating status to get what they want. But there are real feelings involved. Prinsloo and Levine’s children should not be collateral damage in the internet’s quest to meme everything.

Stroh did later issue an apology to Prinsloo, saying, “I fully realize I’m not the victim in this. I’m not the one who’s really getting hurt here. It’s Behati and her children, and for that, I’m so, so sorry.”

Celebrities on Instagram use their platform for a multitude of things. Mostly to promote their businesses, sometimes to advocate for what they believe in, but rarely to weigh in on a scandal or rumor not involving themselves. Levine’s cheating rumors have sparked conversations online amongst many other big Hollywood names.

Sara Foster was particularly upset by this situation. The 90210 star made a TikTok video responding to Levine’s misconduct. “Cheating is so gross,” she started, “Putting it out there for the world to see for a pregnant woman to see when she could have just messaged her privately. We don’t feel sorry for you. You knew this man was married and you participated.” These sentiments were not out of line as some did agree with her position and Stroh had no shortage of comments saying the same.

Although model Emily Ratajkowski completely disagreed and also publicly made a statement saying so. Ratajkowski’s position on the matter is no surprise as she just ended her own marriage due to infidelity. “I don’t understand why we continue to blame women for men’s mistakes, especially when you’re talking about 20-something-year-old women dealing with men in positions of power who are twice their age,” she said, “Also, if you’re the one in a relationship, you’re the one obligated to be loyal so the whole other woman to blame, that’s bad and it’s literally designed to keep women apart.”

Her support for Stroh was empowering. Levine’s actions were wrong and disrespectful towards his children and his wife. While these women did know that he was married, there is an argument to be made about older, famous men in Hollywood using their power to manipulate young women. This debate continues to be a point of contention in society, but the true moral of this story is that no one wins when infidelity is involved.

Let’s continue to hold people everywhere, not just in Hollywood, accountable for their wrongdoings and questioning even our most beloved celebrities. In the meantime, the memes need to be put to rest as we show compassion and sensitivity for Prinsloo and her children at this time.