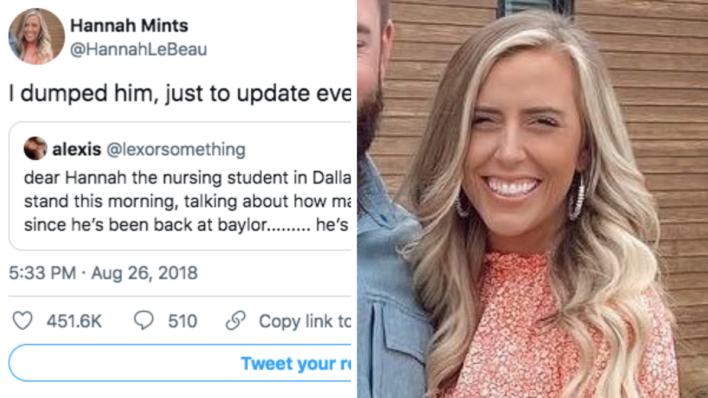 One sassy nurse bounced back from public heartbreak in boss fashion we can all applaud and learn from. Stray dog
By Bryan Liquor    August 20, 2021

One sassy nurse bounced back from public heartbreak in boss fashion we can all applaud and learn from.

Twitter user @alexxiisj was at a taco stand when overheard a story she just couldn’t believe. Next to her was a guy bragging about how he was cheating on his girlfriend, a Dallas nursing student named Hannah.

“Dear Hannah the nursing student in Dallas, i heard ur bf @ the taco stand this morning, talking about how many times he’s cheated on u since he’s been back at [B]aylor [University],” she wrote, followed by, “he’s trash. dump him.”

That’s all it took for the Twitter tribe to swing into action to find Hannah. The post was retweeted over 60,000 times and favorited almost 250,000 times.

Some joked that they’d stop and question every Hannah they know and come across.

“i’ll help a sista out, i’ll look for every hannah nametag in the school tomorrow,” tweeted one.

“Every Hannah at that school bout to ask their BF ‘were you at the taco stand this morning’” replied another.

Well, it seems that that the joke was on the boyfriend. Not long after the tweet, Hannah (@HannahLebeau) caught wind of it and took action.

Oh, but Hannah was just getting warmed up.

After ditching her man, she focused on losing more dead weight. Using her newfound notoriety, she shared her Venmo account for those who might want to help pay her student loans.

Over 40 people responded both with cash and words of encouragement.

“Glad you’re not letting a Warner keep you from living your Elle Woods dreams.”

Behind all pain is your greatest success

It’s painful enough to find out that your so-called significant other is cheating. Finding out in a viral post is next-level hurt.

Imagine being in a stadium packed with 70,000 people as the speakers announce that your partner’s a cheating dog — who’s been barking about it all over town. That’s a painful scar to heal.

That’s what makes it so great that people like ‘Twitter user @alexxiisj see cheating as any other awful act that needs to be called out. It’s important not just for girls like Hannah, but as a message for all the other unfaithful out there.

Hannah’s reaction is so inspiring. She could have just sulked, sighed and cried into a cozy blanket of warm tweets. Instead, she took lemons and made a tall glass of lemonade.

Keep Hannah’s story in mind the next time you fall on hard times.

You just never know where that journey might take you.