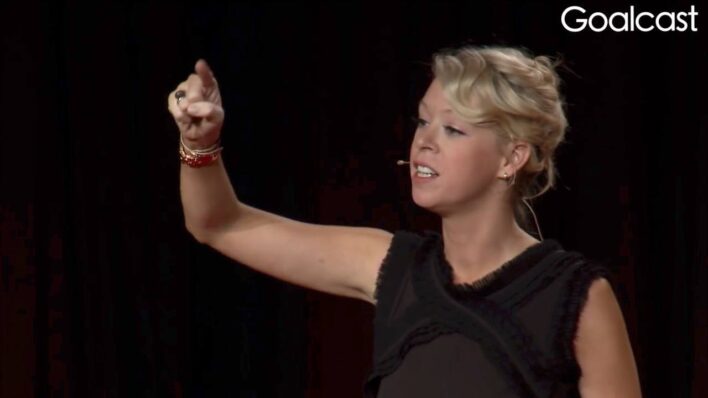 Adrianne Haslet: Don’t Be a Victim, Be a Survivor

Adrianne Haslet – Thrive Adrian Haslet survived the Boston Marathon bombing, and dreams of dancing again. She wants you to
By Goalcast    May 13, 2017

Adrianne Haslet – Thrive Adrian Haslet survived the Boston Marathon bombing, and dreams of dancing again. She wants you to

Adrian Haslet survived the Boston Marathon bombing, and dreams of dancing again. She wants you to know: she is not a victim. She is a survivor.

“We crossed onto Boylston street and bam, we heard a loud bang, and the next thing we knew we were on the sidewalk. I was looking down at a waterfall of blood that used to my left foot, my husband covered in shrapnel, and I thought two things. Number one: there is not a single man on this planet that I would rather be lying next to in this moment. And Two: this is it.

“Just when we started to say the things that only married people can say in a time like this, Boston’s Bravest came and swooped me up and took me to the nearest hospital, and there I was, lying there, no longer the bronzed beautiful ballroom dancer, bedazzled, ready to perform. I was cut up, shredded up, stapled back together, sewn up, glue. I lost four inches of hair, I looked like a troll doll, I was covered in other peoples’ fabric, other peoples’ blood, and it was a mess.

“A doctor lays a hand on my shoulder at the wheelchair as I’m wheeling through the room, and says to me, ‘I need to tell you something. I heard your interview this morning, I heard you say you wanted to dance again and I’m here to tell you, I’ve been here. I’ve been here for years. I’m here to tell you, you shouldn’t have hope. I have never seen an amputee dancer in all of my years, it’s not going to happen, your chances are one in a million.’

“And I raised my finger in the air and I told him, ‘If my chances are one in a million, I will be that one,’ — mixed in with other words — and then I turned around and I wheeled the other direction, balling my eyes out, only hoping that my words were true.

“It’s important to me to not be called a victim. A victim means I belong to somebody, or I’m suffering. I’m not suffering, I’m surviving. I am a survivor.”