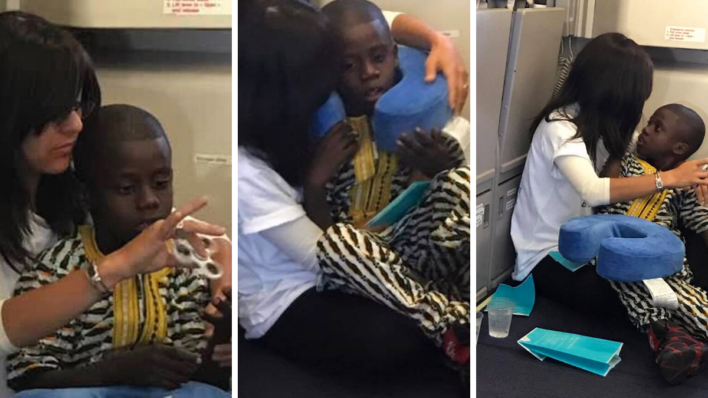 When helpless parents couldn’t stop their child from crying on a flight, one woman stepped in to help with compassion.
By Bryan Liquor    March 20, 2022

When helpless parents couldn’t stop their child from crying on a flight, one woman stepped in to help with compassion.

While we might have our differences, the one thing we can all probably agree on is this: international flights are brutal; doubly so for young kids. Rochel Groner, her husband, and those aboard an 8-hour flight from Brussels to New York were about to find out just how much.

Sitting next to the Groners was an 8-year-old boy. Everything was calm when, out of the blue, the boy, trying to cope with the flight, started wailing.

Groner told Inside Edition that she sensed the boy was struggling to say something, but couldn’t.

He was crying and just started to shriek. It was clear to me that just from listening, [that] this was a child who didn’t have a use of a vocabulary. He was trying to communicate something.

As the boy’s crying intensified – and passengers took notice – Groner feared the flight might get grounded.

“The phones [on the plane] just started to ring so I’m getting thoughts in my mind we’re going to have an emergency landing. You can see people kind of craning their necks and trying to figure out what’s going on and all I’m thinking about is this poor mom; she’s probably mortified as it is.”

With passengers grumbling and the boy’s parents at a loss, Groner decided to act. What happened next could only be called pure magic.

I just put out my hand. It was surreal. I didn’t know what I was doing. There are tears streaming down his face. He put out his hand. I just put him on my lap and just gave him a gentle but firm hug and started to rock him and he was quiet

Together, she said the two began to doodle on a motion sickness bag as they quickly bonded like besties. “He started to smile and he looked at me and took his glasses off and put them on his face. All of a sudden, we were friends,” she recalled.

She stayed with the boy for over 2 hours as the rest of the plane stared in disbelief. Groner hugged the boy, and even let him use her neck pillow to keep him comfy.

Rochel’s husband Benzion snapped pictures of the moment and posted them to Facebook. It quickly went viral, with users gushing over his wife’s gesture.

“Not at all surprised. What a lucky boy that she was there.

“WOW! So inspiring and in awe!!,” posted another.

Another highlighted Groner’s courage to act.

“Sometimes people want to help but hold themselves back thinking they might make things worse. It took guts for her to get up & try. She changed her life & the boy’s life for sure & created a moment in time of love & inspiration in the lives of those on the plane. I’m tearing up & having difficulty swallowing so I think this story changed me, too.”

How Daring to Connect With Someone Can Bring People Closer

It told me that everybody just wants a hug and to be listened to and if we’re willing to do that, we can literally change lives.

The truth is, most of us would also be slightly annoyed if the same situation had happened to us; that is what makes what Groner did so special.

It doesn’t have to be.

By breaking away from the crowd to comfort a perfect stranger, Rochel Groner showed us that when you dare to connect, you bring everyone closer. It’s a lesson to remember the next time we see someone having a rough time.