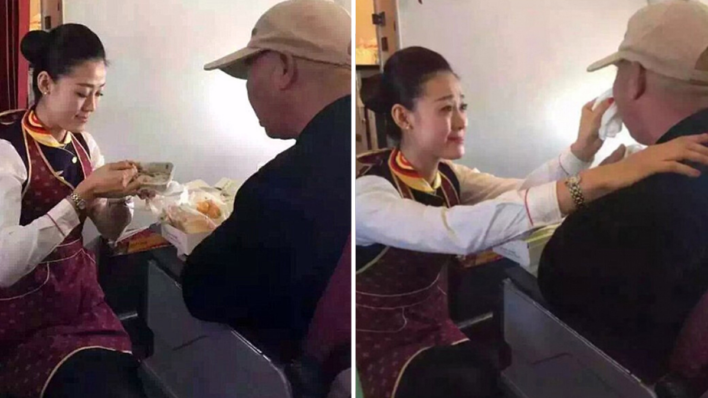 One flight attendant’s kind gesture towards an elderly man in a wheelchair brought him and the rest of the passengers to tears.
By Joel Balsam    February 24, 2022

One flight attendant’s kind gesture towards an elderly man in a wheelchair brought him and the rest of the passengers to tears.

In 2015, a 71-year-old retired professor in a wheelchair named Niu was traveling with his wife who was also his caretaker (if that’s not love, what is?). But due to an upgrade from the airline, Niu was brought up to the front where he could have more leg room. The problem was, without his wife, he struggled to eat.

As the inflight meal came, Niu was given a meal with rice like the rest of the passengers, but he couldn’t grip his spoon properly.

Noticing his difficulties, flight attendant Fan Xuesong knelt down and handed him a box of noodles instead. Niu was so touched by what the flight attendant did that he started to get emotional and cry.

When she continued to assist him with his meal as he struggled to chew, he sobbed even more.

“Mr. Niu worked hard his whole life and contributed to the society, we should be kind to him,” Fan said, according to GoodTimes.

Other passengers were touched by how kind the flight attendant was being and they tried to take her picture- but she declined.

“Someone tried to take her picture and she asked them not to,” Niu said. “I couldn’t help but cry as she helped me eat, blew my nose, and wiped away my tears.”

After the flight, Niu said Fan’s sweet gesture deserved more than a single thank you.

I do not know the girl’s name but given the chance I would thank her again.

Make the world a better place

Sure, it is a flight attendant’s job to care for their passengers. But Fan went above and beyond for a stranger; she saw a helpless man and did her best to make him feel comfortable.

This is a reminder that a little kindness goes a long way (you can read these quotes about kindness), and if more of us did sweet gestures like this, the world would be a much lovelier place.