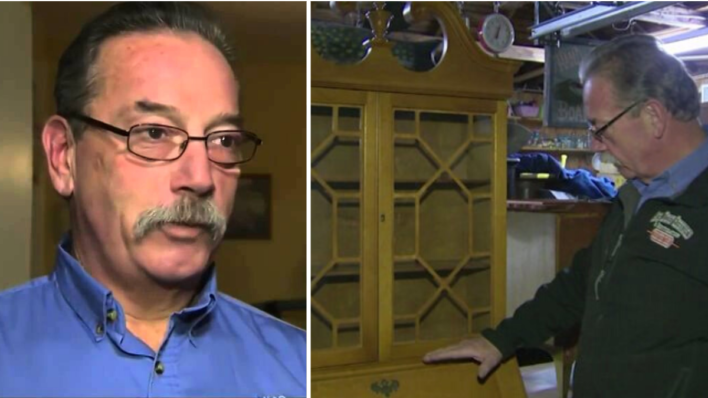 One man made a once-in-a-lifetime discovery when he finds a hidden envelope inside an antique desk he had bought for $40.
By Amber Dowling    February 23, 2022

One man made a once-in-a-lifetime discovery when he finds a hidden envelope inside an antique desk he had bought for $40.

There’s a rush that comes with finding that perfect piece of antique furniture. Winning one at an auction can make it feel extra special, especially if you’re trying to save some money. But when Phil LeClerc brought home a Governor Winthrop secretary desk from an auction house in 2014, he had no idea it would be life-changing for someone else.

LeClerc was a frequent visitor at the Holbrook auction house in Massachusetts. So he didn’t think twice about bidding $40 on an old desk, which he won. Once he brought the piece of furniture home, however, he decided to have a closer look.

Naturally, there were a few imperfections, but LeClerc noticed there was a missing knob. So he began searching through the desk and tapping it to see if anything would come out. Governor Winthrop desks are a common auction house item and known to have plenty of secret compartments, so the man figured the knob may have fallen into one. He didn’t initially find the knob, but what he discovered instead was mind-blowing.

According to WTKR, LeClerc began discovering mature bonds- and lots of them. “We found 50s, and then we found 100s, 200s, 500s, and then we found a stack of six $10,000 bonds,” he told the publication. All in all, when the desk had been thoroughly examined, he was holding $127,000 worth of bonds that had just been tucked away. Not a bad return for a $40 investment.

“First I said, ‘Oh, this can’t be real. This doesn’t happen,’” he later told The Boston Globe.

It was really a fluke that it was found. If I wasn’t looking for the knob…I never would have found it.

LeClerc was obviously excited by the discovery, but after some self reflection he felt as though the money wasn’t his to keep. Knowing that was his motivation to contact the auction house so they could alert the previous owners. As it turns out, a man (who chose to remain anonymous), had auctioned the desk as well as other items in his 94-year-old father’s house as he prepared to sell it.

According to Marg-E Kelley, the auction house owner, the man was trying to cover his dad’s medical expenses and the cost of an assisted living facility. The family knew about the bonds but hadn’t been able to locate them.

The family had been looking for them for years. He was so happy. It could not have happened to a nicer guy.

The power of antiques

Discovering nearly $130,000 inside a $40 desk may be a rare story, but it seems as though heartwarming moments that connect families or invoke memories happen quite often at auction houses.

In an interview with the Globe, the owner drove that point home. “I’ve been doing this for 10 years and every day the stories get stranger and better and (more) fabulous,” she said. “The gentleman whose family the bonds belong to, he can’t even believe it. He said, ‘I’m over the moon.’”

LeClerc could have chosen to keep the bonds for himself or his family, but he did what he thought was right and tracked down the rightful owners instead. In the end, that integrity helped out a family with an ailing father, but it also made LeClerc feel good for doing the right thing.

“It was a great find,” he told WTKR. “It was even better after hearing the story of the family.”

The story reminds us that there are still plenty of good people in the world, but it also goes to show you that doing the right thing isn’t always easy. LeClerc probably could have used that money, but it was also an effort to track down the owners and ensure the bonds got back into the right hands.

Few of us would ever be in that situation, but maybe the next time you find a lost wallet, an article of clothing, or another piece of property, maybe you could do more to find the owner. Look for a name, post about the item in a local social media group, or even hang a piece of clothing in a visible place to help reunite it with its owners.

After all, you never know how meaningful your discovery might be to someone else.