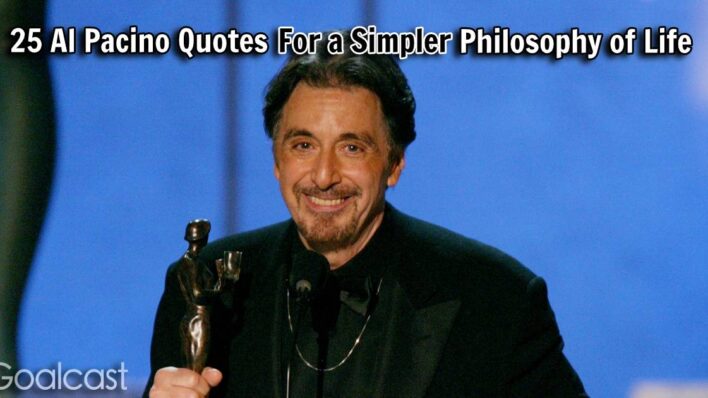 25 Al Pacino Quotes For a Simpler Philosophy of Life

Al Pacino is one of the few actors to hold the “Triple Crown of Acting”. Here are 25 Al Pacino quotes that reveal a simple life philosophy.
By Flavia Medrut    February 14, 2020

Al Pacino is one of the few actors to hold the “Triple Crown of Acting”. Here are 25 Al Pacino quotes that reveal a simple life philosophy.

Born on April 25, 1940, Alfredo James Pacino is a prolific actor, filmmaker, screenwriter, and one of the few to hold the “Triple Crown of Acting.”

Pacino started off from humble beginnings as he worked a variety of jobs before studying theater. Once he got chance to prove himself, no one could deny the future star’s talent so he soon appeared in many off-Broadway productions.

The moment that marked Pacino’s career was after he portrayed the role of Michael Corleone in The Godfather. The trilogy earned him numerous accolades, including his first Oscar nomination, and his performance is still regarded as one of the best in film history.

Another unforgettable performance was that of Tony Montana in Scarface — one of the best mob movies ever made.

Al Pacino is undoubtedly one of the most charismatic, respected and finest actors of all time whose legacy will live on forever. To celebrate his accomplishments, in 2007, he received a Lifetime Achievement Award from the American Film Institute.
We have collected some of his most iconic quotes and movie lines for you to enjoy.

Forget the career, do the work. If you feel what you are doing is on line and you’re going someplace and you have a vision and you stay with it, eventually things will happen.

All I am is what I am going after.

My first language was shy. It’s only by having been thrust into the limelight that I have learned to cope with my shyness.

Sometimes it’s better to be with the devil you know than the angel you didn’t know.

If you can identify with people, you can empathize with people and therefore you understand things.

I don’t regret anything. I feel like I’ve made what I would call mistakes. I picked the wrong movie, or I didn’t pursue a character, but everything you do is part of you and you get something from it.

It turned out that time doesn’t heal the wound, but in its so merciful way, blunts the edges ever so slightly.

You’re only as good as the chances you take.

You need people who can tell you what you don’t want to hear.

If something is working, don’t fix it. Keep going. Go with the glow.

I believe in one day at a time; you’ve got TODAY, that’s what you’ve got.

Me, I always tell the truth. Even when I lie.

You’ll never be alone if you’ve got a book.

I’m constantly striving to break through to something new. You try to maintain a neutral approach to your work, and not be too hard on yourself.

The actor becomes an emotional athlete. The process is painful – my personal life suffers.

My weaknesses… I wish I could come up with something. I’d probably have the same pause if you asked me what my strengths are. Maybe they’re the same thing.

There are many things my father taught me here in this room. He taught me: keep your friends close, but your enemies closer.

I don’t think actors should ever expect to get a role, because the disappointment is too great. You’ve got to think of things as an opportunity. An audition’s an opportunity to have an audience.

Either we heal now, as a team, or we will die as individuals.

You need some insecurity if you’re an actor. It keeps the pot boiling.

I don’t ever give my opinion. Opinions I have about anything are in my personal life.

The camera can film my face but until it captures my soul, you don’t have a movie.