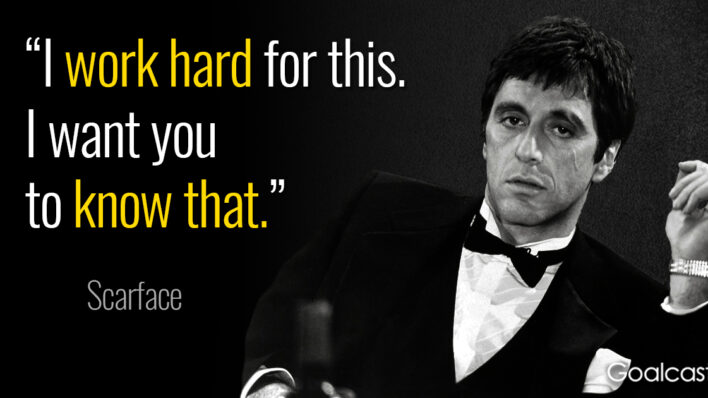 One of the best mob movies ever made, Scarface — directed by Brian De Palma and written by Oliver Stone
By Flavia Medrut    March 7, 2018

One of the best mob movies ever made, Scarface — directed by Brian De Palma and written by Oliver Stone — is the story of a Cuban refugee who wants to live the American dream, but not in the way it was intended.

Scarface was released in 1983 and it is an actual remake of the 1932 film with the same name, but with a much more deeper exploration of its theme.

Showcasing his character’s grit, wit and charm, Al Pacino gave one of his best performances in the movie.

However, the most important element of the film is the protagonist’s motivation – Tony Montana always wants more, and patience is not one of his traits. While in Cuba, he didn’t have anything, and now he wants it all.

Being compared with the Shakespearian Macbeth, the tragedy of Scarface is that because Tony Montana wanted everything, and nothing satisfied him, he ended up with nothing. Here are 11 Scarface quotes that prove that too much of anything can come back to bite — they will still inspire you to work hard though (just choose to work with integrity).

Good? You’re not good. You just know how to hide, how to lie. Me, I don’t have that problem. Me, I always tell the truth. Even when I lie.

All I have in this world is my balls and my word and I don’t break them for no one. Do you understand?

Lesson number one: Don’t underestimate the other guy’s greed! Every day above ground is a good day.

The guys that last in this business, are the guys who fly straight. Low-key, quiet. But the guys who want it all, chicas, champagne, flash… they don’t last.

With the right woman, there’s no stopping me. I could go right to the top.

You a communist? Huh? How’d you like it, man? They tell you all the time what to do, what to think, what to feel. Do you wanna be like a sheep?

I work hard for this. I want you to know that. You think you can take me? You need a fucking army if you gonna take me!

You need people like me so you can point your fuckin’ fingers and say ‘That’s the bad guy!’