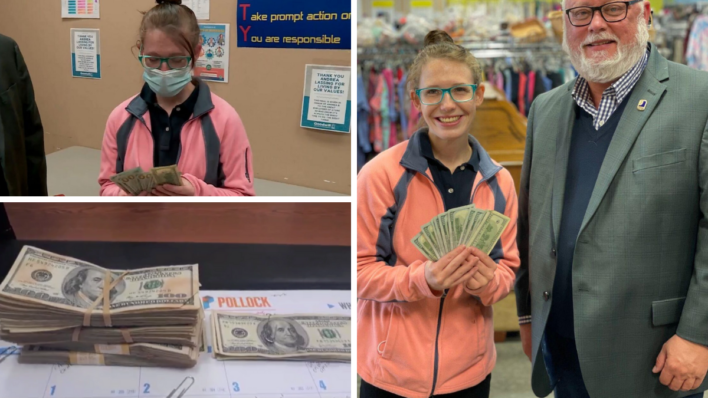 Despite a tough year during the pandemic, a Goodwill employee decided to give back $42,000 she found in a sweater
By Joel Balsam    April 16, 2021

Despite a tough year during the pandemic, a Goodwill employee decided to give back $42,000 she found in a sweater — and was rewarded for her good deed.

Andrea Lessing was sorting through a stack of donations at a Goodwill in Oklahoma when she felt something that she thought was a book wrapped in a sweater. But it wasn’t reading material, it was $42,000 in cold, hard cash.

“My first thought was that it was fake. We’ve seen $5 and $20 donated here and there, but never in my life had I seen that much money,” Lessing told CNN.

Instead of stuffing her pockets, Lessing decided to report the money and track down the donor.

With the help of some documentation of the donation, Goodwill was able to track down the money’s owner and gave it back.

Lessing said giving back the money was an important lesson of honesty for her six-year-old daughter.

“With every decision I make, I have to think about whether I would want my daughter to follow in my footsteps,” she said.

“I want her to know that kindness, integrity, and honesty can get you a lot of places in life.”

Rewarded for her honesty

“Because of everything that’s been going on within the past year and a half, it just meant more than anyone could imagine,” Lessing said. “I didn’t return the money expecting a reward or expecting to be on the news, I just believe if you do something good, it will come back to you eventually. And it did.”

In a statement, the CEO of Goodwill Industries of Central Oklahoma Jim Priest said Lessing did the right thing by returning what is one of the largest cash finds ever at a Goodwill.

Reflecting on the possibility of taking home the money, Lessing has no regrets about her decision.

The world can be a greedy place, but it’s good to know that innocent, honest people like Lessing still exist. Now we can only hope that the owner of this cash is also motivated to do something generous and keeps the positive chain of events going.