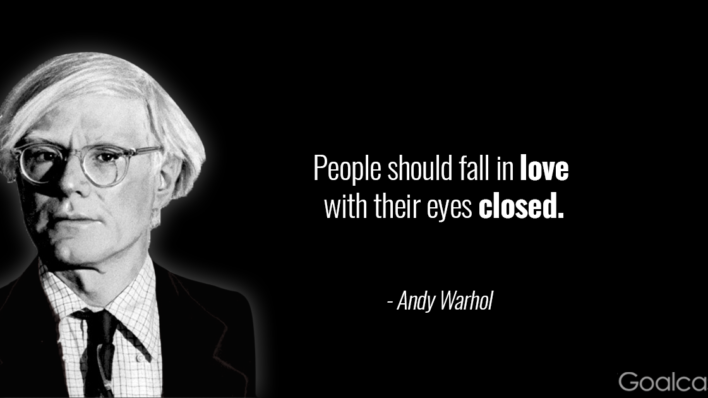 Super talented Andy Warhol was born on August 6, 1928 and was considered the most successful and highly paid commercial
By Flavia Medrut    August 10, 2018

Super talented Andy Warhol was born on August 6, 1928 and was considered the most successful and highly paid commercial illustrator in New York. Warhol got his first drawing lesson from his mother, when he was 8. After contracting Chorea — a neurological disorder characterized by uncontrolled movements — Andy was bedridden for several months and drawing became his escape and favorite activity.

In the late ’50s, Warhol dedicated most of his time to painting and unveiled the concept of Pop Art — a fascinating new form of artistic expression with focus on mass-produced commercial goods. So in 1962 he exhibited the iconic 32 Campbell’s Soup Cans paintings.

RELATED: Stop Settling and Start Designing Your Life with Purpose

You might’ve also heard about Andy Warhol’s Coca-Cola bottles or the celebrity portraits he created for Marilyn Monroe, Elvis Presley, Elizabeth Taylor, Mick Jagger, and Mao Zedong. The “Eight Elvises” is one of the most valuable paintings in history, being resold for $100 million back in 2008.

Here’s our collection of 16 Andy Warhol quotes to help you find value in every moment of your life.

Sometimes the little times you don’t think are anything while they’re happening turn out to be what marks a whole period of your life.

People should fall in love with their eyes closed.

You need to let the little things that would ordinarily bore you suddenly thrill you.

As soon as you stop wanting something, you get it.

People need to be made more aware of the need to work at learning how to live because life is so quick and sometimes it goes away too quickly.

I’m not afraid to die; I just don’t want to be there when it happens. When people are ready to, they change. They never do it before then, and sometimes they die before they get around to it.

The best thing about a picture is that it never changes, even when the people in it do.

They always say time changes things, but you actually have to change them yourself.

Sometimes people let the same problem make them miserable for years when they could just say, ‘So what’. That’s one of my favorite things to say. ‘So what.’ The idea of waiting for something makes it more exciting.

Every song has a memory; every song has the ability to make or break your heart, shut down the heart, and open the eyes. But I’m afraid if you look at a thing long enough; it loses all of its meaning.

And your own life while it’s happening to you never has any atmosphere until it’s a memory.

Don’t pay any attention to what they write about you. Just measure it in inches.

Just because people throw it out and don’t have any use for it, doesn’t mean it’s garbage.