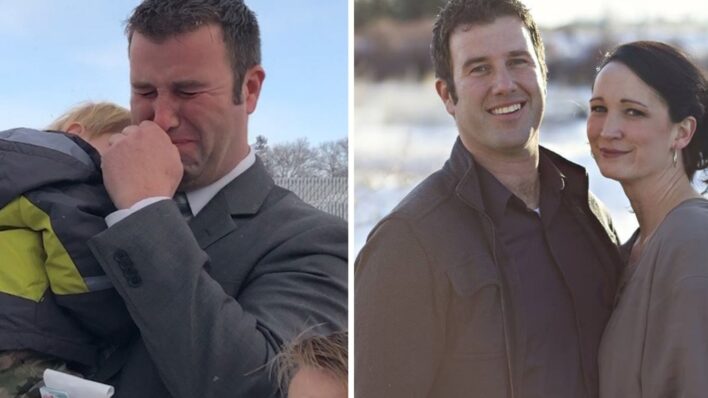 One anonymous act of kindness created an unforgettable moment for a widowed dad. From garage to grief It was an
By Bryan Liquor    February 4, 2021

One anonymous act of kindness created an unforgettable moment for a widowed dad.

From garage to grief

It was an ordinary Idaho day for Dakota Nelson and wife Rheam. They were in the garage when Dakota left to get some tools. Nothing could have prepared him for what he returned to minutes later.

“We were just in the garage, goofing around, having fun. We came back and she was just dead on the ground basically”

Shocked and grief-stricken, Nelson struggled with his sadness while still working three jobs to support his seven children, ages one to sixteen.

One day, as Nelson was picking up his kids from school, he was surprised by local news correspondent Nate Eaton.

After introducing himself to the widow, Eaton revealed a gift box and asks if Nelson’s children wanted to see what was inside.

They opened it to find $2,000 in gift cards for groceries and essentials.

That wasn’t the whole story.

“I forgot to put one more thing in there, hopefully you can use this”

Eaton handed Nelson a cheque for $8,000. He was speechless and overcome with emotion.

When Nelson asks who to thank, he’s told simply that it’s anonymous. After a few moments of shocked silence, both Eaton and Nelson share a teary hug.

Give to do good, not look good

It’s agonizingly impossible to imagine how difficult life’s been for Dakota Nelson. Yet he says that although it’s been a challenging year, he counts his blessings.

You can be sure that includes the perfect stranger who recognizes that it’s the gesture — not the fanfare — that matters most. It’s an example we can all learn from.