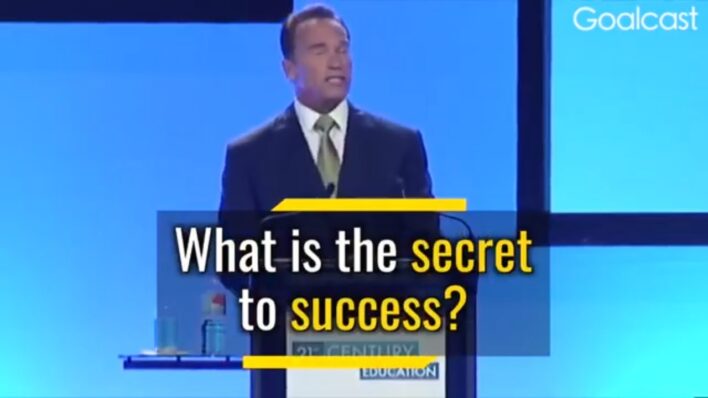 These are Arnold Schwarzenegger’s 5 Rules for Success

Actor Arnold Schwarzenegger reveals his 5 secret steps to tackling life and becoming Mr. Universe (at the age of 20), 7-time Mr. Olympia, Hollywood legend and 2-term Governor of California. His story proves that no obstacle is too big to overcome and no vision, too big to achieve.

People ask me all the time, what is the secret to success? And I always tell them, well, the short version is, you got to have a 22-inch biceps. And you gotta be able to kill predators with your bare hands and of course you got to have this charming Austrian accent. That’s a given. The long version is that I actually always had five rules. You don’t need to be a bodybuilding champion, you don’t need to want to be an action hero or anything like that. If you want to excel in whatever you do, those rules are for you. So my first rule is find your vision and follow it. If you don’t have a goal, if you don’t have a vision, you just drift around and you’re not gonna be happy. I grew up after the Second World War, Austria right along with Germany lost the Second World War. There was of course depression, there was a terrible economic situation. I wanted to get out of there, I wanted to escape. And luckily one day in school I watched a documentary about America. I knew exactly that is where I wanted to end up. The question was just how do I get there? How do I get to America?

No one had the money to travel or anything. But one day I was fortunate enough to see a bodybuilding magazine and on the cover was this very muscular guy. Mr. Universe becomes Hercules star, his name was Reg Park. I read the article as fast as I could, learning about how he grew up in Leeds in England, poor. And how he trained five hours a day, every single day and trained and trained and trained so then he finally became Mr. Great Britain. And then became Mr. Universe, and then he won a second Mr. Universe title and a third Mr. Universe title and then all of a sudden he landed in Rome in Cinecitta doing Hercules movies. And as I read, I became more and more certain I had that vision very clearly laid out. To be a champion on that same stage where he won the Mr. Universe, and then to move to America, then get into movies. From that moment on, everything that I did, no matter how hard I had to work or how much I had to struggle, it didn’t matter ’cause I knew what the purpose was and I found my passion. Always discover your vision and the rest will follow.

Number two, my second rule is never ever think small. You have to go and shoot for the stars. I didn’t just think about being in movies, no I wanted to be a movie star. I wanted to have above the title billing. I wanted to become the highest paid entertainer, I basically wanted to be another John Wayne. What’s wrong with that? Never think small, think big. My third rule is ignore the naysayers. I think it is natural that when you have a big vision and big dreams and you have big goals that people are gonna say around you I don’t think it can be done. I think it’s impossible. I mean, it started right away when I was 15 years old and I became a bodybuilder. Right after it happened, I said I want to be a world champion in bodybuilding, I want to be Mr. Universe. They immediately said, are you crazy? Bodybuilding is an American sport, forget about it. It’s nuts. And then when I wanted to go into show business after I won 13 world championship titles in bodybuilding, I said I want to be like Reg Park. I want to be a Hercules, I want to get into movies.

Well, I tell you when I met those agents and managers, their reaction was, oh Arnold, that is so funny. You want to be what, a leading man? Oh come on, I mean look first of all let’s start with your body. You’re gigantic, you’re like a monster. And then your accent, oh it gives me the chills just listening to your German bullshit, come on now. Have you ever seen an international movie star with a German accent? It doesn’t happen, forget about that. And then your name, what is it, Schwartzen, Schnitzel or something like that? People are gonna storm the theater and the movie houses because Schwartzenschnitzel is starring in a movie. Oh yeah, I can see that already. Imagine that, everywhere I turned they said no, it won’t happen, it’s not gonna happen and forget about it. Luckily I did not listen. I started taking acting classes, English classes, even accent removal classes. I ran around all day saying lines like a fine wine grows on a vine.

All of a sudden I got a little break, all of a sudden I got a TV show. A little part, then another little part, and then Pumping Iron and Stay Hungry and then of course I landed the big role as Conan the Barbarian so finally I got the big big break. And you know what was so interesting about it was the director said that at the press conference if we wouldn’t have had Schwarzenegger with those muscles we would have had to build one. And then when I did Terminator, James Cameron said the I’ll be back line became one of the most famous movie lines in history because of Arnold’s crazy accent because he sounded like a machine! So as you see, everything that the naysayers said was a liability became an asset. Ignore the naysayers. The fourth rule is work your ass off. You never want to fail because you didn’t work hard enough. And it doesn’t matter in what area you’re in. No pain, no gain. Listen, when I came to the United States, I remember that I trained five hours a day every day and I was managing a construction business and I was a bricklayer and I went to college also. And I took acting classes from eight o’clock at night to 12 o’clock midnight, every day I did that. Work your butt off, that’s what I always believe no matter what you do, work, work, work.

My fifth and last rule is don’t just take, give something back. Tear down that mirror that makes you always look at yourself and you will be able to look beyond that mirror and you will see the millions and millions of people that need your help. And this is why I try to take every opportunity that occurred to give something back. I started training Special Olympians, I started after school programs for the most vulnerable children, for inner-city children to make them be able to say no to drugs, no to gangs, and no to violence. We all can create change whether it is in our neighborhood or in our local schools ’cause the bottom line is it is up to us. Have a vision, think big, ignore the naysayers, work your ass off, and give back and change the world. Because if not us, who? If not now, when?