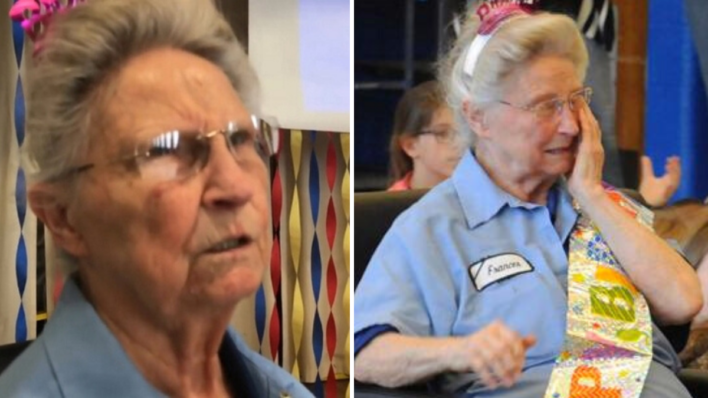 At 77-years-old, the Belle Elementary School janitor had never had a birthday party, but that would soon change.
By Lindsey Staub    June 16, 2022

At 77-years-old, the Belle Elementary School janitor had never had a birthday party, but that would soon change.

Frances Buzzard had never had a birthday party. That was, until this year. Buzzard, lovingly known as Ms. Frances, was a janitor at Belle Elementary School in West Virginia.

She had only been working there for a year, but all the students and staff already adored and respected her. She always came to work with a smile on her face and a good attitude, making her a pleasure to be around.

She was about to turn 77-years-old but never in her life had she had her own birthday celebration. Once, her family tried to plan her a party, but “it was so icy and cold, nobody came.”

Why Elementary School Staff Wanted to Throw Their Janitor a Party

When the staff at the elementary school learned of this from the head cook, they decided to throw her a birthday party themselves.

“The opportunity couldn’t pass us by,” Amanda Mays, the principal of Belle Elementary School, said.

A little after lunchtime, Frances and her co-worker Rendell Heater heard an announcement over the loudspeaker informing them that they were needed in the cafeteria. Frances expected to encounter a mess to clean, but instead she found a room of staff and students applauding her.

RELATED: Janitor Who Amassed $8M In Secret Shocks Whole Town After His Death

All in all, there were more than 200 people in the cafeteria waiting to shout “surprise” at their beloved custodian.

Frances was absolutely shocked. She could not stop smiling, even as emotional tears stung her eyes. She admitted that she comes from an impoverished family because of which she couldn’t celebrate birthdays or holidays.

Principal Mays led Frances to her throne — a cushioned chair in the center of the room — and gave her a crown and a sash. A table of cupcakes were to the side of the cafeteria, two with burning candles on them for Frances to blow out and make a wish.

They even made a video for Frances where they photoshopped photos of her into major historical events, including the moon landing and Woodstock.

“Through the lens of history, Ms. Frances Buzzard, this is your life,” the video announced.

RELATED: He Started As An Illiterate Janitor – Now, He’s One Of The World’s Most Successful Latino Execs

The children all serenaded Frances with the happy birthday song as she stood at the front of the room.

Never had nothing like this. Oh, it’s a great big party, I appreciate it. I’ve never had nobody do this for me.

When the staff and students of the elementary school learned of the parties their admired custodian missed out on for the last 77 years, they did something about it. Their love and kindness transformed Frances’s birthday and created a memory she will never forget and made the event the best she has ever had.