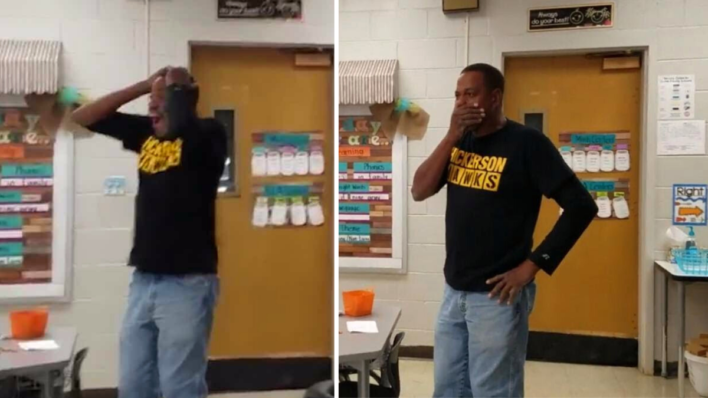 Two teachers taught their classes sign language to give their custodian a well-earned surprise.
By Lindsey Staub    May 26, 2022

Two teachers taught their classes sign language to give their custodian a well-earned surprise.

When James Anthony walked into the kindergarten classroom at Hickerson Elementary School on October 23, 2018, he didn’t know what to expect, but it wasn’t what he saw.

As a janitor at an elementary school in Tennessee, Anthony was used to entering classrooms filled with children. But on October 23, Anthony’s 60th birthday, he was confronted by two classrooms worth of kindergarteners singing the Happy Birthday song to him. But they weren’t just singing, they were signing because Anthony is Deaf.

RELATED: Taco Bell Employee Notices a Customer Struggling to Order Food – Uses a Secret Skill to Save the Day

“His reaction was ecstatic,” kindergarten teacher Allyssa Hartsfield told Good Morning America. “He cried, and of course we got emotional with him. After it was over, he said, ‘This is the best birthday present you could’ve given me.’”

Hartsfield was one of two teachers who planned the surprise for Anthony. She and Amy Hershman, the other kindergarten teacher, combined their classes to teach the kids the “Happy Birthday” song in ASL so that when Anthony walked in on his birthday, the entire kindergarten class was able to wish him a happy birthday.

“They really love him,” Hershman said. “The kids were super excited — they learned that song in probably five minutes.”

Anthony has been the custodian at Hickerson for 15 years, but he had been working in the school district for almost 30.

Hickerson posted a video of the performance on Facebook, and it garnered more than 128,000 views.

“[Mr. James] said, ‘Guys, I’m kind of famous — I’m going to Hollywood next,'” Hartsfield said. “We didn’t realize it’d get this much attention. It has really affected a lot of people.”

How Two Teachers Proved the Importance of Welcoming Others

But the kindness did not stop there: Both Hartsfield and Hershman said they will celebrate Anthony’s birthday for many years to come.

RELATED: Deaf Son Brings Mom To Tears By Using His Savings To Secretly Pay Off Her Mortgage

Hartsfield and Hershman taught their kids more than just how to sign; they taught them a valuable lesson in inclusion. A quick seminar in sign language resulted in an incredible moment for Anthony, serving as a reminder that if someone is differently-abled, we shouldn’t leave them out, but instead, learn to include them.